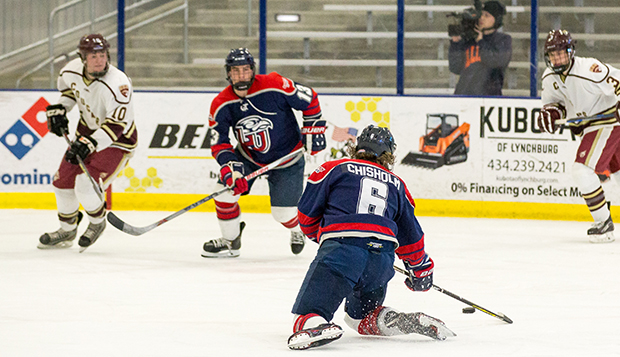 The Flames (14-5-2), who swept the College of Charleston by 8-0 and 3-0 scores on Jan. 18-19 at home and Christopher Newport University by 6-2 and 6-3 counts Jan. 25-26 in Newport News, Va., prevailed in the rematches with those two teams. Freshman forward Justin Barstead netted a hat trick and sophomore goalie Sam Bell notched the win in net as Liberty defeated the Cougars, 11-3 in Thursday's first round, before senior goalie Derek Guzik recorded a 7-0 shutout against the Captains in Saturday's semifinals.

Junior goalie Clayton Pierce started in the Flames' 5-4 victory over Richmond in Friday's third round of pool play. But after playing Coastal Carolina, ranked 15th in last week's ACHA DIII poll to a 3-3 tie in Friday's second round, Liberty let a 3-2 third-period lead slip away in a 4-3 loss to the Chanticleers in the final.

After entering the tournament ranked ninth in the South Region, Liberty remained at that spot in the final ranking on Feb. 21 to secure a bid to the March 9-10 South Regional Tournament in Huntsville, Ala. The Flames will face No. 6 Ole Miss (19-2-2) in the first rounds set for Saturday, March 9, at 2 p.m.