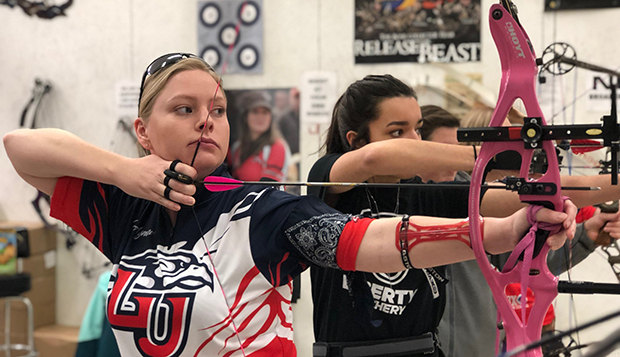 Liberty University's men's and women's archery teams will carry a full quiver of competitors to this Friday's and Saturday's competition at the Augusta Expo Center in Fishersville, Va. The Flames' and Lady Flames' scores at the regional shoot for archers from Virginia, Ohio, Kentucky, Tennessee, and North Carolina will count toward placement in the 50th U.S. National Indoor Championships.

"We'll be taking 12-14 team members and there will probably be close to 1,000 archers at this event, though not all of them will be shooting collegiately," Liberty Head Coach Ian Rigney said, estimating there will be around 200 collegiate competitors in the men's and women's compound, bowhunter, barebow, and Olympic recurve events. "We will have somebody represented in each division."

Flames and Lady Flames archers will shoot two rounds of 30 arrows starting Friday at 4 p.m. and another 60 arrows on Saturday at 4 p.m., with up to 10 points awarded per arrow for a maximum individual score of 1,200. Their individual scores will be tabulated against competitors from 11 other regions to determine national results by the end of February.

Liberty's archers have their eyes on the prize after putting in weeks of training for the competition. In January, with temperatures dropping well below freezing, Rigney opted to move practices from the Liberty Equestrian Center to T.R.U. Ball Archery, a Liberty alumni-owned company that has a climate-controlled indoor range in Madison Heights.

Rigney said JMU, one of the event's host schools, will be among the teams to beat in the Olympic recurve competition after the Dukes won that discipline at the Oct. 26-28 3D Outdoor National Championships in Foley, Ala.

Individually, he believes Flames freshman Connor Rothermel has a legitimate shot at the indoor national title.

Senior Louis Boyd, who won last year's bowhunter competition in Las Vegas, has moved up to the compound division.

"He has been shooting very well in practice and there is no reason why he shouldn't qualify for the finals," Rigney said, noting he will be joined by graduate Spencer Foster in the men's compound division.

"They'll both be a force to be reckoned with because they've been shooting indoor most of their archery careers," Rigney said. 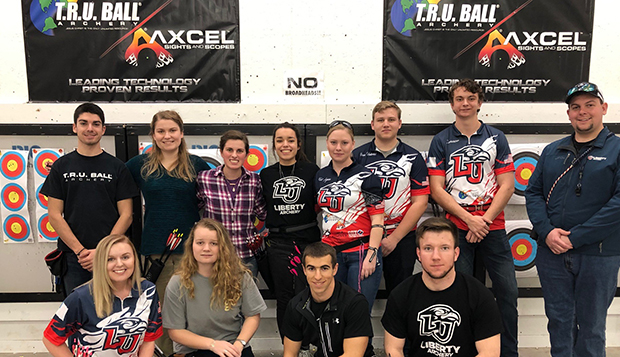