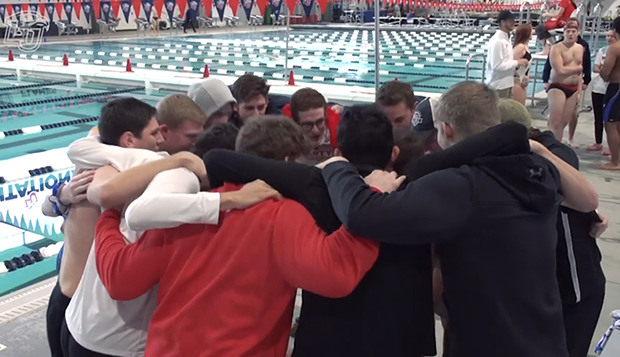 The Flames' swimming team gets fired up in a huddle before Saturday's Winter Classic Invitational at the Liberty Natatorium.

"JMU had more numbers than us," Flames first-year Head Coach Heath Grishaw said. "We did very well for only having 11 swimmers. We just did not have enough bodies to fill every event. I was impressed, but not satisfied. Right now, we just have to figure out how we can improve."

Several members of the Lady Flames NCAA Division I swimming & diving team assisted with timekeeping, scoring, and coordinating the meet, as men's team members have for previous women's competitions.

"It was fun to watch," Grishaw said. "We are one school and we have a great relationship between both NCAA and Club Sports teams. We look to work together and it's good to see them bond as a program. I'm proud of them and I loved to see the turnout we had for our first meet. It was awesome to see the support. As we bring in better quality swimmers, we hope to fill the stands for future events."

Several of the Flames swimmers will travel to JMU on Feb. 23, their last meet to earn qualifying times for the March 29-31 College Club Swimming National Championships at Ohio State.

"We are on the road to nationals and the hardest part of the season starts right now," Grishaw said. "The guys are ready and I think they're hungry."