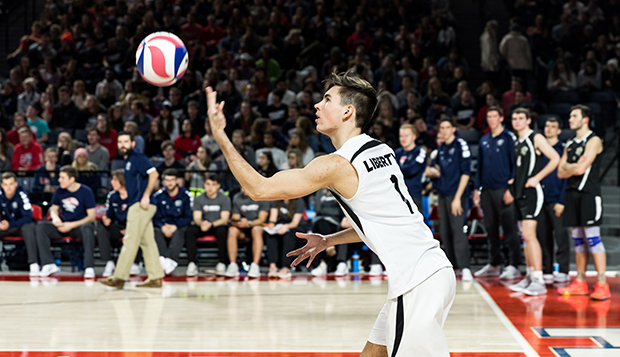 "The competition was great, but today was a really good day for us," Liberty Head Coach Bryan Rigg said. "Everything was clicking for these guys today and everybody played very well all around."

The Flames dominated JMU in the semifinals, 25-11, 25-19, setting up a championship rematch with Virginia Tech, the team it defeated in four games in last weekend's best-of-five Midnight Mayhem match in the Vines Center. Liberty swept the Hokies in Saturday's final, 25-22, 25-15.

"This time we played better as a team," Flames senior middle hitter Gene Dejesus said. "Everyone came ready to play today and it was great. We were super scrappy on defense, we got great serving, great passing, and everyone was just dominating when they had the chance to hit a set-up from (senior setter) Kaden (Knepper)."

Liberty set the tone for points with exceptional serving, with senior outside hitter Brady Quakenbush, sophomore outside hitter Sean Taggart, junior libero Daniel Koloff, and Knepper each recording between five and 10 aces.

"Our serves are offensive right now and the Virginia Tech match is a classic example," Rigg said. "They couldn't pass three of our servers and that changes the whole dynamic of the game."

"We played consistently, we got all 10 guys in, and Gene (Dejesus) and Josh (Knapp) really picked it up with their hitting and blocking," Rigg said. "Bringing James (Morton) off the bench, he only gets a few attempts each game, but he crushes them, and as an outside hitter, he hits at a high percentage."

"What we are working on is our mental toughness," Flames Assistant Coach Josiah Williams said after coaching the team for the first time. "Our passing was there and we were clicking the entire day until that last match when the passing started to break down a little bit, the sets weren't there, the hitting wasn't there, the blocking wasn't there, and the guys started to get down."

Liberty's DI and DII teams will find out on Wednesday where they stand in the season's first National Collegiate Volleyball Federation (NCVF) rankings before the DI squad travels to Bloomington, Ind., to compete in next Saturday's and Sunday's Hoosier-Illini Classic. At last year's tournament, the Flames were undefeated before being eliminated by the Hokies in the semifinal round. 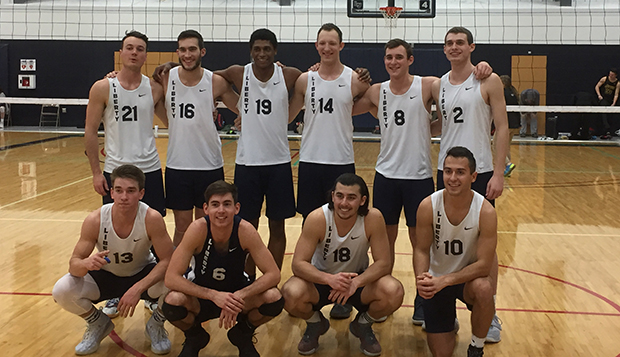