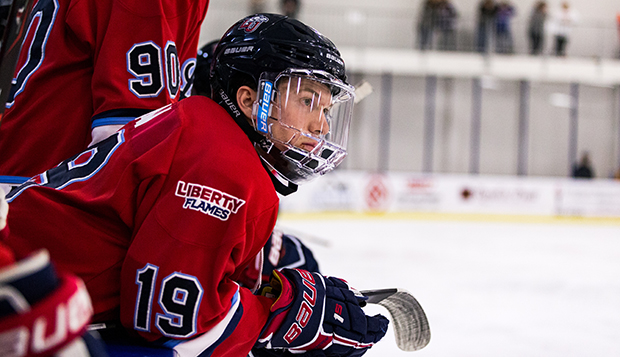 Flames forward Quinn Ryan leans over the bench during a Jan. 25 game at the LaHaye Ice Center. (Photo by Gabrielle Calhoun)

"It's exciting for the university and a tribute to the quality of players we're bringing into the program, which is great to see," Flames DI men's hockey Head Coach Kirk Handy said.

In addition to Ryan, Liberty will be represented in Russia by four Lady Flames Division I players on the Team USA women's squad.

Ryan, Liberty's leading scorer on the season with 24 goals and 28 assists (eighth in ACHA DI), will fly out of New York with Team USA on Feb. 24, the morning after the Flames complete their Feb. 22-23 series against reigning ACHA DI national champion Adrian College at the LaHaye Ice Center. He will miss Liberty's regular-season-ending home series against Alabama on March 1-2 but will return in time for the March 15-17 ESCHL Tournament at West Chester, Pa., where the Flames will contend for their third consecutive ESCHL crown.

"Hopefully, I can get better over there, elevate my game, and come back and help our team the best that I can," Ryan said.

In Russia, Team USA will open with a preliminary matchup with the Czech Republic on March 1 at the Crystal Ice Arena. It will play four more preliminary games — against Hungary on March 3, Russia on March 5, Slovakia on March 7, and Japan on March 9 — with the top four teams advancing to the March 11 semifinals.

This will be the 10th time Team USA's men's hockey team will participate in the 11-sport biannual event also known as the Winter Universiade, set up similar to the Winter Olympic Games. It will feature more than 3,000 collegiate athletes from around the world who will stay in an Athletes' Village.

Liberty's DI men's hockey team traveled to Russia for a sports outreach in 2009 and to the bordering republic of Latvia in 2013. Ryan is excited to be an ambassador for Liberty in Russia, where Team USA will try to improve on its ninth-place showing at the 2017 Winter World University Games in Kazakhstan.

"It is definitely an exciting opportunity," Ryan said. "I hope to go over there and do the best that I can to represent my school and my country. It will be really good competition. I just want to be an example of Christ in everything I do over there."