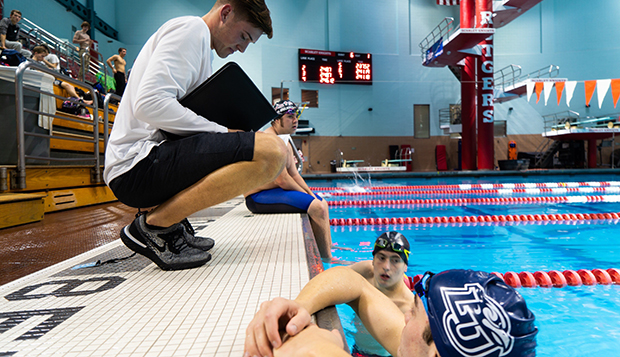 "The guys are hungry for it," Liberty Head Coach Heath Grishaw said. "They really want to show what we've been training hard for the past two years and show off that beautiful natatorium. We're blessed to be in that and we are excited to make history."

With nationals hosting separate meets for swimming and diving, this weekend will be the only combined event for the team.

The Flames will welcome men's swim teams from JMU, Longwood, Radford, VCU, and the University of Lynchburg for the Winter Classic Invitational, starting at 11 a.m.

A diving competition involving Liberty's six men's divers and members of the Liberty Diving Academy (LDA) and open to divers of all ages from the public will take place simultaneously. The LDA is headed up by Lady Flames Division I Women's Diving Head Coach Victoria Lamp Wood with assistance from her husband, Lucas Wood, the first-year coach of the Flames' men's diving team, Liberty junior diver Elijah Jantomaso, and former Virginia and Princeton diving coach John Krakora.

Liberty picked up six swimmers at the start of the spring semester, freshmen Steven Mills and Stephen Covert and four who swam for the Flames in last year's inaugural season — senior Noah Miller and sophomores Ben Klipp, David Schafer, and Matt Sonnen — bringing their roster to 16.

"Those are big-time additions for us," Grishaw said. "All of them competed at nationals for us last year. They're back and they're swimming awesome for being gone a whole semester so I'm excited to see what times they have to throw down."

Grishaw said formulating the lineups for the Flames' relay teams has been a work in progress with so much talent to choose from.

"Our relays are up for grabs for anyone," he said. "This year is a whole different game, we have so many people who are competitive in each relay, which is exciting but also challenging for the coaches, a puzzle to figure out who goes where."

Only the 200-yard freestyle and 200 medley relay events will be contested on Saturday whereas at nationals, swimmers can enter three individual events and as many as five relays.

The College Club Swimming National Championships are set for March 29-31 at Ohio State before the club diving national championships are held the first weekend in April in Colorado. The two events will have separate scoring not factored into the team totals.