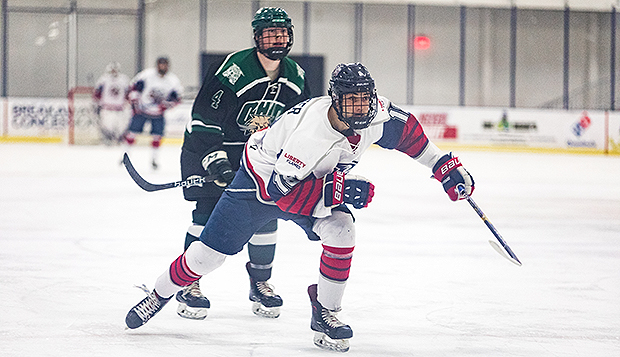 Freshman forward Darren Carter started the Flames' comeback against Ohio on Saturday after lifting Liberty to its only lead in Friday's loss to the Bobcats. (Photos by Gabrielle Calhoun)

Liberty University's ACHA Division II men's hockey team rallied from a 3-1 third-period deficit to salvage a split with Ohio University with a 5-3 victory Saturday afternoon at the LaHaye Ice Center.

The Flames scored four consecutive goals in the final 10:50 of regulation to stage the dramatic comeback, sparked by freshman forward Darren Carter's snipe from the top of the left circle. Sophomore Division III call-up Alex Norwinski scored the tying goal on a backhanded rebound of a shot by freshman defenseman Charlie Wilkie with 6:36 remaining in regulation.

Flames freshman left wing Peyton Nash scored the game-winner at the 3:52 mark, threading a fast-break feed from sophomore center Michael Niederer through the five hole of Ohio goalie Ryan Dunning for a 4-3 lead. Niederer intercepted an outlet pass and clinched the win with an empty-net score with 1:16 to play. Sophomore goalie Adam Partridge improved to 14-2 with the victory.

Liberty (18-5, ranked third in the Southeast Region) came into the series having won 14 of its previous 15 games before having its eight-game winning streak snapped in Friday night's first game, a 5-2 setback.

Ohio (10-8-1, ranked 14th) opened the scoring with 1:56 left in the first period before the Flames responded to tie the contest in the first minute of the second period when Nash received a crossing pass from senior right wing Matthew Perri and fired a shot from the top of the left circle past Dunning.

Carter lifted Liberty to a 2-1 lead with a rocket from the top of the right circle with 9:47 left in the second period before the Bobcats netted four unanswered goals in the third period.

The Flames will conclude their regular season Friday at 6:30 p.m. against Stevenson at the LaHaye Ice Center before competing in the Mid-Atlantic Collegiate Hockey (MACH) South Division playoffs, Feb. 22-24 at Delaware. Liberty will then host the March 1-3 Southeast Regional tournament, needing two wins to return to the ACHA DII National Championships, set for March 22-26 near Dallas. 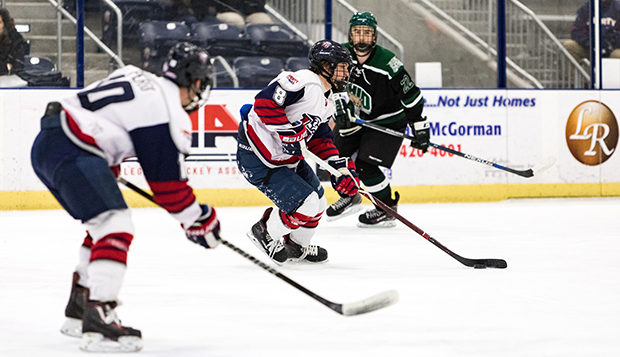