Flames can clinch share of ESCHL regular-season title at R.I. 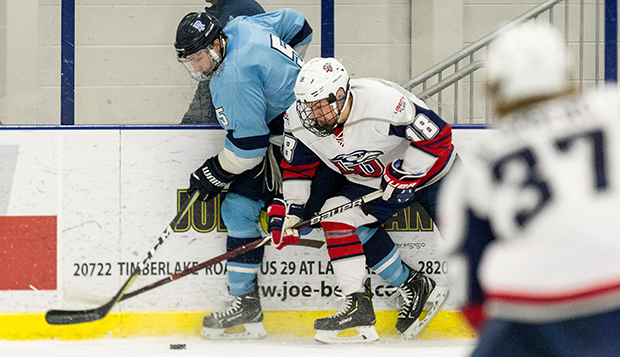 Liberty University's ACHA Division I men's hockey team, the reigning ESCHL regular-season champion, can clinch at least a share of the title defense with a sweep at Rhode Island this weekend. The outright winner receives the conference's only autobid to nationals.

"All we have to do is stay focused and keep winning," Flames Head Coach Kirk Handy said. "Rhode Island is a really good opponent and our guys are going to have to be ready to go."

This weekend marks the final road trip of the regular season for Liberty. The Flames will host the final three series — against Delaware (Feb. 15-16), Adrian (Feb. 22-23), and Alabama (March 1-2) — before traveling to West Chester, Pa., to try to win their third consecutive ESCHL Tournament Championship, and potentially Dallas for the March 21-26 ACHA DI National Championships.

The Flames are 6-3-1 and have only outscored opponents by a 33-30 margin on the road this season, compared to their 13-1-1 record and 83-24 goal differential in the friendly confines of the LaHaye Ice Center.

After being swept in its spring semester-opening series at Stony Brook on Jan. 19-20, Liberty recharged its offense in last weekend's lopsided 2019 home openers against Rochester College.

Liberty scouting report: Due to injuries and suspensions, the Flames will only have a 16-man roster available for Friday night's opener before getting one forward and two defensemen back for Saturday's rematch.

Junior defenseman Garrett Nelson returned from injury to score his first goal and distribute four assists against Rochester, moving him back into third for the Flames with 23 assists on the season.

Rhode Island scouting report: The Rams will be playing their ninth and 10th consecutive home games after sweeping ESCHL rival Delaware last weekend to improve to 6-2 for the homestand and 10-5 on the season at Brad Boss Arena. Rhode Island features a balanced attack, led by forwards Jake Salisbury (12G, 27A), Jonathan Alsfeld (17 G, 14A), who has netted a team-high four game-winners, Patrick Creamer (13G, 15A), and Chad Stone (12G, 12A).