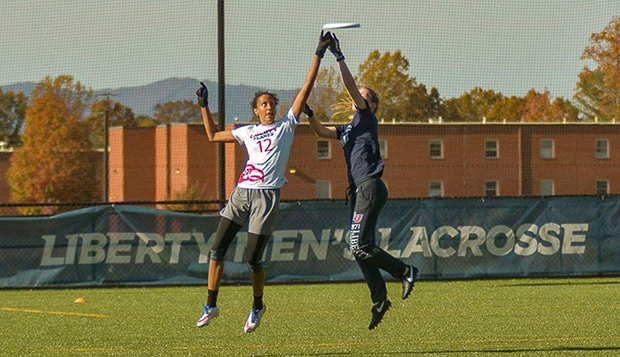 Liberty University's women's Ultimate team opened its spring semester schedule by going 3-3 and placing sixth out of 10 teams at Saturday's and Sunday's Winta Binta Vinta, hosted by the University of Virginia in Charlottesville.

"We were seeded seventh, so we broke seed," Lady Flames Head Coach Jonathan Mast said. "It was a really early tournament, but a good opportunity to learn and grow and for our first-year players to get a little experience and some playing time to implement what they learned and have been training to do in the fall and for some of our second- and third-year players to develop into leadership roles."

Liberty split its four games in Saturday's pool play — losing to Duke, 10-7, in a match bumped up to 7:30 a.m., which prevented the Lady Flames from warming up, and host UVa, the eventual tournament champion, 11-2, before bouncing back from an early deficit to beat William & Mary, 7-5, and dominate George Mason, 8-3.

In Sunday's playoffs, Liberty overcame a slow start to defeat VCU in the first round, 8-3, setting up a rematch with William & Mary in the fifth-place game, which the Lady Flames lost to the Tribe, 10-6.

"It was an exciting game," Mast said. "They scored the first three points and we we had a couple miscommunications on offense and turned it over near our own end zone and never quite recovered."

Liberty added five players to its roster between semesters, including Bethany Fowle and Taylor Thomas who played for the Lady Flames in previous seasons but were not able to in the fall.

"Bethany was our MVP of the tournament for how dependable she was," Mast said.

Senior Charis Jantomaso led Liberty in assists and stepped up in her role as a mid-cutter.

"She is a really good athlete and she played more points than anyone in the tournament, both on offense and defense," Mast said. "She was integral in us being able to move the offense and to chuck the disc to our deep threats."

Senior captain McKenzie Ross anchored the Lady Flames' handling corps and surpassed Mast's expectations — both with her ability in distributing the disc to Jantomaso and her attitude on the field.

Liberty will next compete in the Feb. 23-24 Commonwealth Cup in Axton, Va., which will attract 25-30 teams from all over the East Coast.