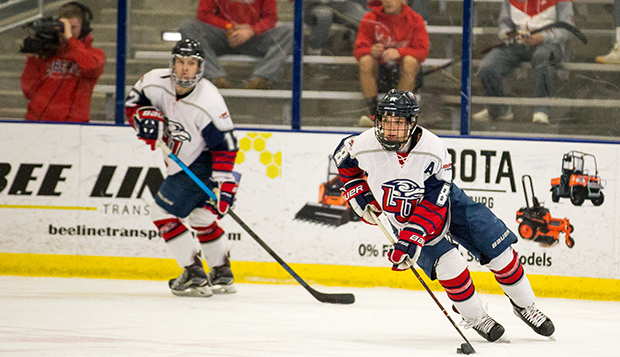 After opening the season at 3-3, the Flames have won eight games in a row and 14 of their past 15 to improve to 17-4 and lock up the top seed for the Feb. 22-24 MACH South Division playoffs at Delaware.

"We're hitting our stride at a good time," Liberty Head Coach Ben Hughes said. "We're really pleased with how all the lines are playing right now and that we have some depth so we can get scoring from any one of our four lines. Our defense is continuing to progress and get better."

Junior defenseman Ryley Richardson ignited the Flames' attack with a shot through traffic from near the blue line set up by freshman defenseman Charlie Wilkie and freshman forward Joshua Malin just 2:50 after the opening faceoff.

Sophomore center Michael Niederer put away passes from freshman left wing Peyton Nash and senior right wing Matthew Perri for a 2-0 Liberty lead at the 6:30 mark of the first period.

The Flames doubled their advantage with two second-period scores by freshman forward Devin Melice — the first assisted by Johnny Kettelle with 16:42 to go and the second at the 2:11 mark off feeds from Bryce Harrison and Niederer.

Delaware ended Liberty sophomore goalie Adam Partridge's shutout bid on a goal by Devin LeBlanc with 17:35 left in the third period before freshman forward Darren Carter answered a little over a minute later for the final score shorthanded on a beautiful backhanded breakaway finish assisted by Wilkie.

The Flames outshot the Blue Hens by a 42-23 margin and Partridge made 22 saves.

Liberty will play Southeast Region rival Ohio this Friday at 6:30 p.m. and Saturday at 4:30 p.m. at the LaHaye Ice Center, where they will also host the March 1-3 Southeast Region tournament with two bids to the March 22-26 ACHA DII National Championships near Dallas on the line.