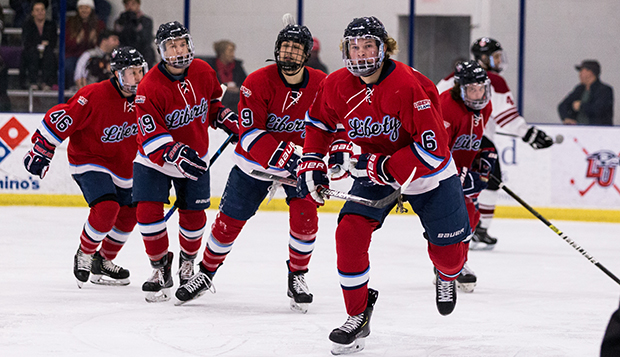 A weekend after starting the new year with back-to-back setbacks at ESCHL rival Stony Brook, Liberty University's ACHA Division I men's hockey team returned to its winning ways at the LaHaye Ice Center on Friday night, routing Rochester College, 13-2, to improve to 12-1-1 at home this season.

"Our guys stayed focused on the task at hand," Flames Head Coach Kirk Handy said. "We've got to clean up the penalty minutes. We want to stay out of the box a little more. But it was nice to see our power play come out with four goals tonight."

Junior defenseman Garrett Nelson returned from injury for the second time this season and netted his first goal and set up two others after entering the contest ranked third on the team with 19 assists.

Nelson started the scoring for Liberty (18-4-2, 13-1-2 ESCHL) by capitalizing on a power play with a wide-open wrist shot in the right crease off a crisp crossing pass from junior forward Victor Blomberg with 15:48 left in the first period.

Rochester tied the game with a power play goal of its own when defenseman Luke Zarzycki launched a shot from near the blue line that deflected off forward Joe Tabbi past senior goalie Josh Halpenny at the 13:25 mark.

Lauber sprinted into the offensive zone and finished a fast-break assist from Thompson with a backhanded shot past Warriors goalie Robert Meadows, stretching the Flames' advantage to 4-1 at the 4:28 mark.

Moments after killing a five-on-three opportunity by Rochester, Liberty capped the first-period scoring with its second power-play goal with the Flames skating up four-on-three. Ryan received Nelson's assist from the high slot and redirected the puck into the net from point-blank range.

Just over a minute into the second period, with the Flames on a five-on-three power play, Bochinski received a pass from Nelson and converted a sharp-angled shot from left of the cage. Less than a minute after that, sophomore forward Ryan Cox slammed in the rebound of a shot by Fricks in a scrum in front of the Warriors' net, putting Liberty up 7-1.

Three minutes later, the Flames made it 8-1 with textbook execution on a fast break as junior forward Josh Hamilton and Ryan assisted Thompson's one-timed finish.

Tabbi got one back for Rochester with a putback in front before Liberty padded its advantage to 9-2 at the 6:49 mark when Gammer forced a steal in the offensive zone and put away a give-and-go pass from sophomore forward Devin Pierce.

Thompson increased Liberty's lead to 10-2 with 16:45 to play early in the third-period by finishing a beautiful backhanded pass from Ryan.

At the 13:58 mark, Gammer received a cross-ice assist from Nelson and fired a shot past Warriors replacement goalie Trevor Osko. Then, with 10:52 to go, Ryan took a pass from Thompson along the boards and lifted a wrist shot from the left slot into the top right corner of the cage. Lauber completed the scoring in the final two minutes by capitalizing on a putback of a high shot through the slot by Hamilton, sliding the loose puck through the five hole.

The two teams will return to the LaHaye Ice Center for Saturday night's rematch, with the 7 p.m. puck drop webcast live by LFSN.