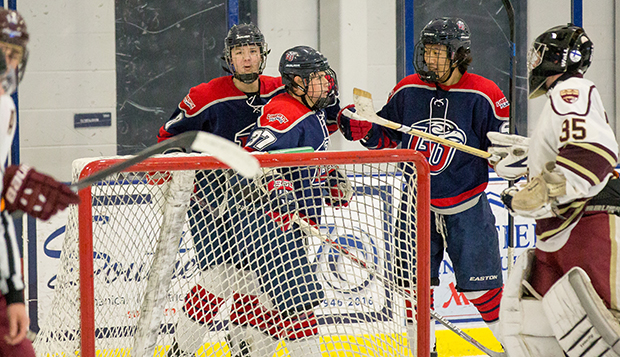 A weekend after Liberty University's ACHA Division III men's hockey team lost three of four games at a showcase hosted by Miami University in Oxford, Ohio, the Flames swept the College of Charleston this past weekend at the LaHaye Ice Center, winning by 8-0 and 3-0 scores.

"They're unreal, probably the best DIII team in the nation," Flames Head Coach Jared Smith said of the top-ranked team in the North Region. "It's good to play teams like that and not a bad thing to have your lunch handed to you every once in a while."

The Flames (11-4-2) were nearly as dominant in Friday's first game against Charleston, when freshman defenseman Maxx Mitchell started the scoring by sneaking past the Cougars defense through the slot and flipping the puck inside the right post with 4:26 left in the first period. Two minutes later, senior center Zach Moore extended the lead to 2-0 before freshman forward Justin Barstead doubled it to 4-0 by netting back-to-back goals in a span of 26 seconds in the second period, with both assisted by GuanYun Hu, a freshman defenseman from China.

Liberty outshot Charleston 52-25 in the first game and sophomore goalie Sam Bell made 25 saves to post his first shutout.

The Flames held a commanding 65-22 shot advantage in the second game, and senior Derek Guzik shut out the Cougars in his final regular-season home game. It was a scoreless tie until Liberty scored all three of its goals in the third period — by sophomore right wing Scott Chisholm, senior forward Andrew Barlass, and Barstead.

This weekend, the Flames, ranked eighth in the ACHA South Region, will travel to Virginia Beach to face East Coast Collegiate Hockey Association (ECCHA) rival Christopher Newport University on Friday at 10:15 p.m. and Saturday at 4 p.m. before hosting the ECCHA Tournament Feb. 8-9.