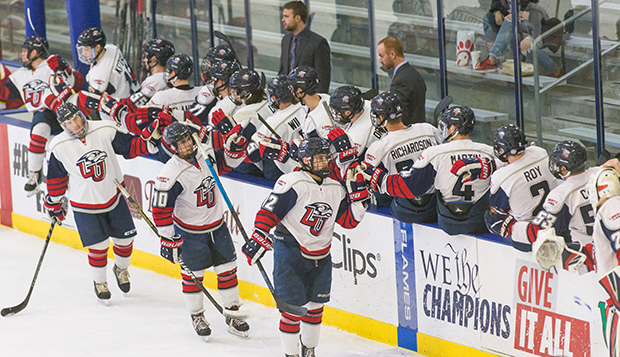 Liberty's bench celebrates a goal against Maryland on Friday night at the LaHaye Ice Center. (Photos by Joel Isimeme)

The three contests were the first for the Flames (16-4) since completing a Battle of the Blue Ridge series sweep of Virginia Tech with back-to-back wins Nov. 30 in Roanoke and Dec. 1 at home.

"We were pleasantly surprised that they were able to get right back into game mode after being on break for so long," Liberty Head Coach Ben Hughes said. "We were excited to get everyone healthy and back into the lineup and the guys did a great job buying into some of the systems we were trying to implement."

Liberty freshman center Timothy Doe started the scoring and freshman defenseman Charlie Wilkie gave the Flames a 2-1 lead with a shorthanded score assisted by Doe with 1:34 left in the first period.

Sophomore forward Blake Flanders netted Liberty's third goal off assists from senior defenseman Drew Crilly on a power play with 12:29 left in the second period before freshman forward Darren Carter and sophomore center Michael Niederer added goals to open a 5-3 lead by the end of the stanza.

Cincinnati, which netted 21 goals in its two Showcase wins, started the third-period scoring before junior defenseman Brandon Drumheller answered for the Flames off an assist from Flanders with 4:57 remaining in regulation. Flanders extended Liberty's lead to 7-4 50 seconds later off an assist from freshman forward Devin Melice.

"Cincinnati gave us everything we could handle and then some," Hughes said. "They're one of the fastest teams we have seen."

Sophomore goalie Adam Partridge made 34 saves to preserve the one-goal win as the Bearcats outshot the Flames, 40-30.

Liberty opened its Showcase with a 7-0 shutout of Maryland on Friday night when sophomore defenseman Bryce Harrison started the scoring with 1:08 left in the first period and senior forward Matthew Perri doubling the lead to 2-0 just 12 seconds into the second off a Crilly assist.

Goals by Flanders and Niederer extended the Flames' advantage to 4-0 before Peyton Nash netted the first of his back-to-back goals with one second left in the second period, adding a second just 1:25 into the third. Freshman wing Cullen Briggs capped the scoring midway through the final period, assisted by Drumheller.

In Saturday's physical, hard-fought 6-3 victory over Marist, Liberty overcame an early 1-0 deficit, sparked by Crilly's laser shot from the point on a power play and a snipe by sophomore defenseman Kyle Martin.

Nash padded Liberty's lead to 3-1 by finishing a back-door feed from freshman defenseman Aaron Partridge before Flanders made a beautiful move on a breakaway goal and Niederer and Perri capped the scoring for the Flames in the third period.

Liberty stretched its winning streak to seven games, dating back to a 5-4 overtime loss at Delaware. The Flames will host the seventh-ranked Blue Hens this Sunday at 2 p.m. back at the LaHaye Ice Center.