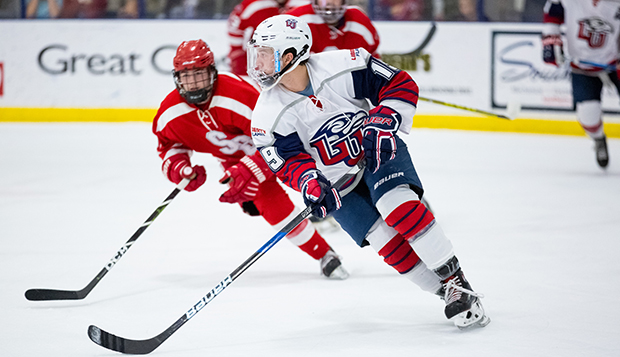 Liberty University's ACHA Division I men's hockey team looks to strengthen its hold on first place in the regular-season ESCHL standings and a potential autobid to nationals as it opens its spring semester against perennial contender Stony Brook Saturday night and Sunday afternoon in Long Island, N.Y.

The Flames swept the Seawolves by 3-1 and 8-1 scores Nov. 2-3 at the LaHaye Ice Center, and have won the last two ESCHL Tournament Championship games against Stony Brook, which had won the previous four.

"Stony Brook is a top team in our conference," Liberty junior defenseman Chaydan Lauber said. "Usually, it gets pretty physical since we've played so many games against each other. We've got quite a rivalry so we know we're going into a battle up there."

Despite ending the fall semester on a seven-game winning streak, Liberty slipped one spot to No. 6 while Stony Brook moved up one notch to No. 15 in this week's ACHA Division I rankings.

"We had a really good first semester, but it's been a long time since our last game so we're looking to start out 2019 with a bang, like we went out last season (on a 19-game winning streak)," Lauber said.

Regardless of the rankings, Flames Head Coach Kirk Handy said the showdown will be key for Liberty to set the tone for the final two months of the season, capped by the March 15-17 ESCHL Tournament and March 21-26 ACHA DI National Championships near Dallas.

"We're looking forward to them, they're big conference games and we'll be ready to go," Handy said. "Each game's real important this time of year so we have to go in there and work hard and be the best team we can be."

Liberty Scouting Report: The Flames' top forward line for the fall semester of juniors Quinn Ryan (19 goals, 20 assists) and Brock Thompson (12G, 11A) and sophomore Cole Gammer (12G, 23A) have accounted for a large portion of Liberty's offense this season. So Handy has opted to spread the wealth in the new year with minor line shifts, moving incoming freshman Josh Fricks up with Ryan and Thompson and teaming Gammer with sophomores Devin Pierce and Jordan Bochinski.

Stony Brook Scouting Report: Forwards Nick Belger (15G, 14A) and Dustin Rinaldo (10G, 11A) and defenseman Kyle Huhn (7G, 13A) have eclipsed 20 points in scoring for the Seawolves.