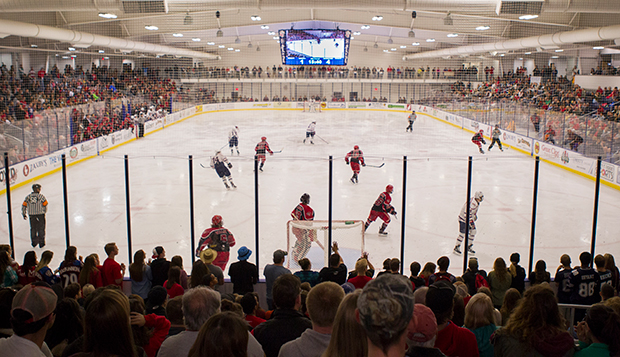 Hockey players ranging from sophomores in high school through those competing at the Juniors level are invited to participate in Liberty University's annual Flames Prospect Camp set for April 4-6 at the LaHaye Ice Center. It will be held in conjunction with Liberty's College For A Weekend (CFAW), the largest recruiting event on campus, a week before the women's program holds its prospect camp.

The three-day camp serves as an early tryout for future Flames men's hockey players at the Division I, II, and III levels with coaches from all three teams evaluating the incoming talent and offering constructive feedback. Players will be divided into six teams and play a total of three games each before being selected to compete one final round of three games between players grouped according to skill levels.

Flames coaches typically offer commitments to multiple players over the weekend and the camp puts others on their recruiting radar.

"It is something we look forward to doing every year," Liberty ACHA DII men's hockey Head Coach and Club Sports Recruitment Coordinator Ben Hughes said. "It is exciting to see all the players come in from all over the country who are interested in playing at Liberty. Some of these people we have been talking to all year, but it is always exciting to see who is going to show up and who is going to do well. It's an interesting dynamic of players who we've been looking at and those we haven't seen before."

Liberty's coaches encourage prospective players at all three divisions to register for CFAW in addition to the Flames Prospect Camp, which will cover their meals and accommodations as well as allow them the opportunity for a full-immersion experience on campus, attending classes and rooming with current Flames players.

"It's about getting to know the players and seeing who will be a good fit for the school and the team," Hughes said. "We want them to get the best experience so they can envision themselves spending their next four years at the university."

Deadline for online registration is March 23 and players should arrive at the LaHaye Ice Center for check-in between noon and 2 p.m. on April 4.