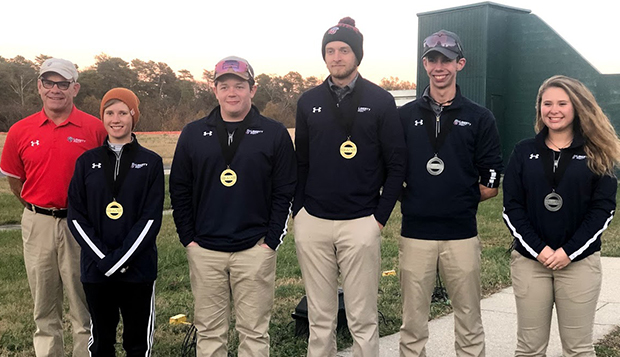 Members of Liberty University's second-year shooting sports teams honed in on their targets of team unity and improved marksmanship in the fall season and have set their sights on individual and team titles in various disciplines at the ACUI National Championships in San Antonio, Texas, this spring.

"As a team, we have grown," Flames junior Casey Williams said. "Whether that's chemistry between the shooters or how much we have been able to learn from each other and (Head Coach Dave Hartman)."

"It means a lot to us and it speaks volumes for our team, just how young we are and how much we have been able to accomplish so far this year," said Williams, attributing the team's success in part to the Liberty Mountain Shooting Sports Complex. "The facility has been a huge help for all of us."

Hartman will hold a shoot-off on Jan. 25-26 to determine the 10 team members who will travel to Fort Benning, Ga., for the Feb. 23-24 Southeastern Region qualifier for the ACUI International Trap and Skeet National Championships, with five to compete in International skeet and five in International Bunker Trap. Target speeds are faster and targets are different in the International discipline, which is the same format used in the Olympics.

After narrowly missing qualifying individuals last year, Hartman is hopeful to have representatives in that event, the highest collegiate competition in the country, to be held concurrently with the March 25-30 ACUI Collegiate Clay Target National Championships in San Antonio.

He plans to carry a team of 10 shooters and one alternate to Texas, where the Flames and Lady Flames will move up to All-American Division 3 after placing second at Division 4 last spring.

Additionally, Liberty's rifle and pistol teams will make their competitive debuts this spring, with a co-ed squad of six traveling to a Sectional small-bore rifle event hosted by the University of Virginia on Feb. 9, and a maximum of 10 men and women competing in the March 8-9 Scholastic Action Shooting Program (SASP) National Championships in Talladega, Ala.