Beach volleyball teams stay active inside and out over winter 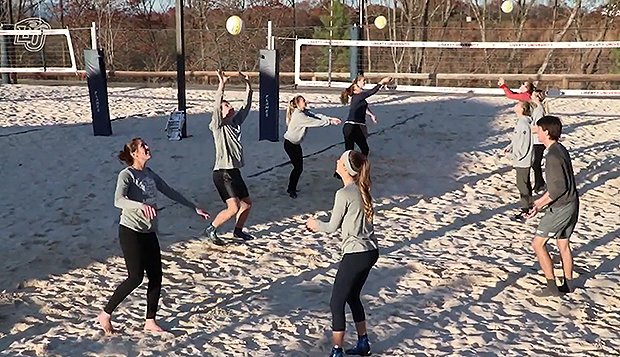 Liberty University's beach volleyball team welcomed an influx of newcomers and developed chemistry throughout the fall season. The Flames and Lady Flames are maintaining their conditioning through strength workouts and their technical skills with indoor drills over the winter months in preparation for the spring season.

"Inside, we work on ball control," Liberty Head Coach Kaleb VanDePerre said. "It's obviously different and easier moving on a gym floor, but we try to keep coming up with drills that will translate well to the sand and just playing and getting competitive."

"When it's nice enough outside, we will try to get out in the sand," he said. "The elements are what make volleyball outside so much different than indoors — the wind, the cold, the rain, moving on a tougher surface."

"There's definitely positives to being indoors and still touching a volleyball and not taking it completely off, but any day we can go outside is awesome," Flames senior Peter Gooch added. "Playing in the elements — the wind and the cold weather — is always a positive because there are some tournaments where we will have to do that."