Schartz makes most of time off ice, set to return to Admirals 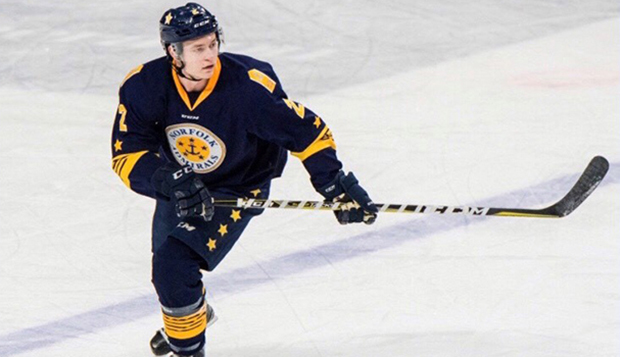 Zane Schartz joined the ECHL's Norfolk Admirals at the end of his junior season at Liberty last spring. (Submitted photo)

Former Liberty University defenseman Zane Schartz will return to the Hampton Roads Admirals' lineup this weekend when the East Coast Hockey League team travels to play the Reading (Pa.) Royals on Friday, the Adirondack (N.Y.) Thunder on Saturday, and the Manchester (N.H.) Monarchs on Sunday.

After a strong start to his second season with the team, scoring three goals and distributing three assists in 12 games, Schartz has spent the past five weeks rehabilitating from tendonitis in his knee, an overuse injury that became debilitating after Thanksgiving. He started practicing again with the Admirals before Christmas and was cleared by the team's athletic trainer for game action this week.

"I was playing a good role on the team, producing offensively and being solid defensively, and the coaches were showing confidence in me, especially for the four or five games before my injury," he said. "There's a lot of season left, so hopefully I can step right back in where I was before the injury and finish strong."

Norfolk (14-19) has been in a bit of a slump of late, since Schartz and several teammates have been sidelined by injury or promoted to other affiliates of the NHL's Arizona Coyotes.

Admirals Head Coach Robbie Ftorek coached Liberty DI men's hockey Assistant Coach Dan Berthiaume when he was a goalie for the Los Angeles Kings in the late 1980s and was a forward on Team USA's silver medal-winning team in 1972.

"I've learned a lot from him," Schartz said. "He's been very helpful in my development and I couldn't ask for a better coach."

Schartz said the time off the ice allowed him to take a more active role in serving in Norfolk through community outreach programs coordinated by his church, LibertyLive at Greenbrier in Chesapeake, Va., pastored by former Flames DI player and goalies coach Dalton Stoltz.

"It's been cool to get involved," Schartz said. "It's been really rewarding to play hockey but also to be able to make an impact off the ice."

He has helped counsel high school youth at after-school worship services, which have drawn 70-80 students on a weekly basis.

"I've been able to hang out and talk with the kids and be there, to be an ear to listen," Schartz said. "Some of those kids are going through difficult times and just want to talk to someone."

He has also invited teammates to his church.

"It has been cool to be able to share Jesus with the guys, many of whom have never been to a Christian church," Schartz said. "Hockey's definitely my platform to share Jesus with others and I'm more focused on that aspect of the game than actually playing the game. The hockey world definitely needs missionaries in it and Liberty really trained me to do that."