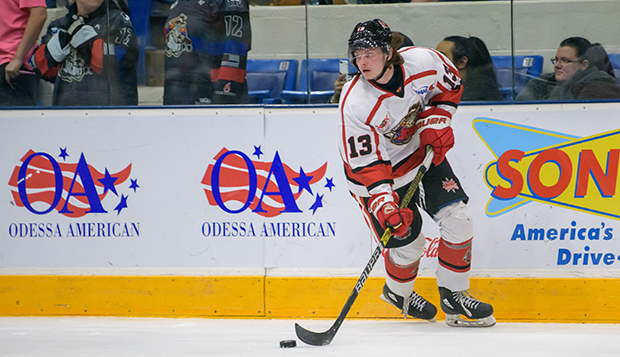 Josh Fricks played the past two seasons in the North American Hockey League, this fall with the Odessa (Texas) Jackalopes.

Josh Fricks, younger brother of Liberty University junior defenseman Jacob Fricks, will join the Flames' ACHA Division I men's hockey team as a freshman forward for the spring semester after originally planning to start his career at Liberty next fall.

"Josh is someone who's been on our radar for a couple years now and we are excited that he wants to join us in January," Flames Head Coach Kirk Handy said. "It's fantastic to add him to Liberty this time of the year."

The Fricks brothers will be the second siblings tandem on the DI team, complementing the junior forward and center duo of Andy and Cody Clark.

"He's two and a half years older than me, so we always missed that one age group where we'd play together," said Josh Fricks, who grew up with his older brother in Laguna Beach, Calif. "We've practiced a lot together but never played on the same team, so it will be kind of fun. I'm excited."

"We want Josh to come in here and work hard and use his skill set to the best of his ability and the most effective way for the team," Handy said. "That's real important for us. We understand what Josh brings to the table and we are excited to see him bring it here. We believe he's got the attitude and the drive that's necessary to compete at the highest level."

After netting 23 goals and distributing 35 assists in 40 games with the Sioux City (S.D.) Stampede U18 Midget team in 2016-17, Fricks played on three North American Hockey League (NAHL) teams over the past two seasons, most recently the Odessa (Texas) Jackalopes.

"I'm a playmaker and am able to put the puck in the net, too," Fricks said during a visit to campus on Wednesday. "I'm fairly fast with good hands. I can make good passes and like to shoot and make things happen on the offense. (Jacob) definitely can move the puck pretty well and quickly from the defensive end. It will be nice to play with him."

He plans to study finance in Liberty's School of Business for a planned career in stock market management. In addition to his brother, Fricks is already friends with and will share a house with teammate Quinn Ryan, a junior forward who currently leads Liberty in scoring.

"I played with him in an FCA summer camp and we just got along really well," Fricks said.

He expects the transition from playing in the NAHL to the ACHA to be a quick one.

"I am ready for it," Fricks said. "Hopefully, it should be a fairly smooth adjustment and I will be able to fit right in and contribute right away — to compete with the team and be able to win (an ACHA DI) national championship."