Flames move back into top five in ACHA Division I rankings 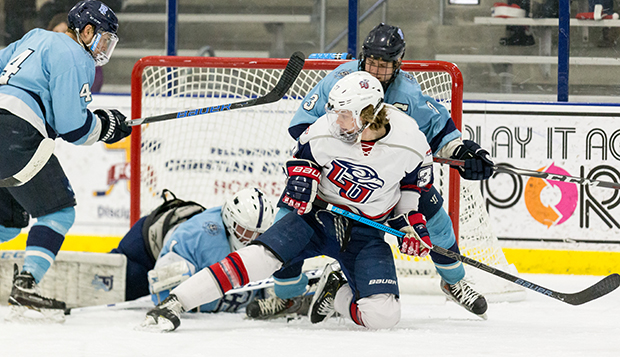 "It shows all the hard work that our guys have put in and the consistency we've had all year, from the players, coaches, and our other personnel who help us out on a day-in and day-out basis," Liberty Head Coach Kirk Handy said. "It's a team effort. It's all of us in this thing together. You play 21 games, and it's a good litmus test on what the team looks like. We've been able to battle, to compete, and to be consistent for the first half of the year."

That is the highest the Flames have been since they repeated at the No. 5 spot for the fourth ranking period, released on Oct. 24. Liberty dropped to No. 8 the following week after being swept at top-ranked, defending national champion Adrian. The Flames' only other regulation loss came Nov. 9 against No. 4 Ohio, a team they defeated in overtime in the Nov. 10 rematch.

"That was a learning experience for us that's going to make us better, playing those types of teams," Handy said. "We're proud of what our guys have been able to accomplish so far (but) this is just part of the journey toward where we want to get this year."

Liberty will now prepare for its most crucial stretch of the season — from the Jan. 18-19 series at ESCHL rival Stony Brook through the March 21-26 ACHA DI National Championships near Dallas.

"Our goal is to be in the top five and continue to be at our best, and I believe we're heading down a real good path, and we're just going to keep plugging away," Handy said. "We have a little break now and then we've got to get back at it in January and make sure our hard work is there every day in practice and continues on through the rest of the year."