DIII Flames drop three of four, slip to No. 10 in South Region 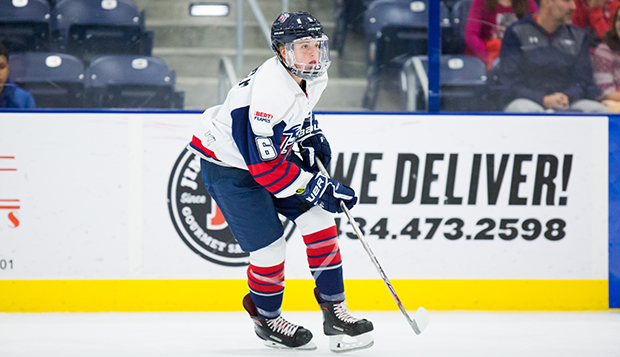 After starting the season on an eight-game winning streak, including a come-from-behind win over East Coast Collegiate Hockey Association (ECCHA) rival Richmond, Sept. 22 at home, Liberty University's ACHA Division III men's hockey team wrapped up the semester on a 1-3-1 skid by losing Saturday's rematch at Richmond, 3-1 at the Ice Zone.

The Spiders (2-5-1) scored on a power play and then after a fortunate bounce off the back boards to take an early 2-0 lead before Flames sophomore forward Alex Norwinski cut Richmond's advantage to 2-1. Richmond tacked on an empty-net goal in the final two minutes of regulation.

The Flames (9-3-1), who climbed as high as No. 6 in the ACHA Division III South Region rankings, dropped to No. 10 in last week's fourth and final poll of 2018. The top 10 teams in the regular season's final poll advance to the South Region playoffs.

"It gives us a reason to get up and show up for every game now," Flames Head Coach Jared Smith said. "We can't take any nights off. We have eight games left, followed by (ECCHL) conference playoffs and hopefully (South) Regional playoffs and (ACHA DIII) nationals, so it is important that we climb as high as we can."

The Flames were coming off a split in Athens, Ga., over the weekend of Dec. 1-2, losing the opener against South Region rival host Georgia, 5-3, before opening a 4-1 first-period lead and holding off Michigan-Flint, 6-4.

After junior left wing Nathan Antesberger started the scoring 18 seconds into the opener against Georgia, finishing feeds from sophomore center Christopher Huntington and Norwinski, the Bulldogs netted four consecutive goals to seize a 4-1 lead early in the second period. Sophomore defenseman Thomas Kazmierczak pulled the Flames within two goals by scoring 8:48 into the second period off an assist from sophomore right wing Scott Chisholm. Norwinski capped the scoring in the third, answering a Georgia goal.

The Flames scored the first four goals against the Wolverines, starting just 32 seconds after the opening faceoff when senior forward Andrew Barlass finished a feed from freshman Justin Barstead. Senior right wing Brandon Smith scored unassisted before senior left wing Kyle Jassmann converted a pass from Barstead for a 3-0 lead and Barstead stretched it to 4-0 by finishing assists from freshman defenseman Maxx Mitchell and Chisholm.

Michigan-Flint cut the deficit in half to 4-2 before Mitchell answered off assists from junior forward Andrew Spuhler and freshman defenseman Michael Eisaman. The Wolverines then trimmed the Flames' lead to 5-4 before Barstead netted the final score off an assist from Jassmann with 5:53 left in the third.

The Flames will open 2019 at a Miami (Ohio) showcase with games against three Michigan teams — Central Michigan on Jan. 11, Schoolcraft on Jan. 12, and Oakland on Jan. 13.