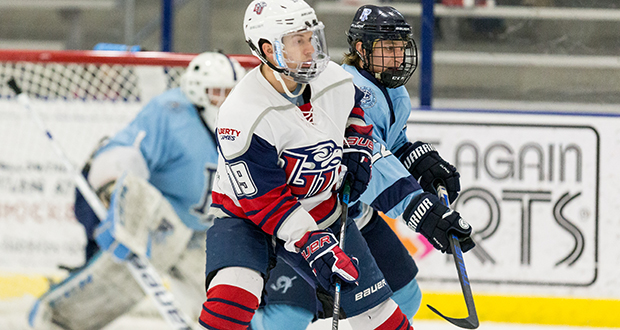 "It was a battle tonight," Liberty Head Coach Kirk Handy said. "Both teams were working hard. It was a big conference game and a huge win for us."

Seconds after Burack made blocker and kick saves on a breakaway by Rams forward Jonathan Alsfeld, Flames sophomore forward Cole Gammer sparked a counterattack and junior forward Jacob Fricks capitalized after receiving a pass in the slot, sliding the puck inside the right post with 18:21 left in the second period.

"We were kind of back on our heels and Fricks goes up the ice and buries one," Handy said.

"Burack was fantastic tonight," Handy said. "In my opinion, he had one of his best games playing for us tonight."

"He's a really hard goalie to score on on a breakaway," added Liberty Assistant Coach Daniel Berthiaume, a former NHL and ECHL goalie. "He's so patient."

Junior defenseman Matt Cruickshank and Gammer assisted the Flames' second goal six minutes into the third period, netted by junior defenseman Josh Bergen on a wrist shot from the point very similar to his game-winner in Friday night's opener.

Junior forward Quinn Ryan stretched Liberty's lead to 3-0 with a spectacular breakaway score with 6:44 remaining in regulation, off another assist from Cruickshank. Ryan leaped to catch a flying puck near the Rams' blue line and dropped it at his feet before accelerating through the slot and threading the puck through the five hole of Rams goalie Daniel DeSilva from point-blank range.

"That was a highlight-reel goal," Handy said. "Quinn's a special player for us and he made a great play there and really got the game where it needed to be."

The seventh-ranked Flames enter the Christmas break on a seven-game winning streak after extending their run of success against the Rams to 11 games without a loss.

Handy is happy with his squad's consistency through 21 games.

"That's a big thing for us," he said. "We get a little break now and will get the focus back in on Stony Brook once we start up again," in a spring semester-opening series Jan. 18-19 on Long Island, N.Y. 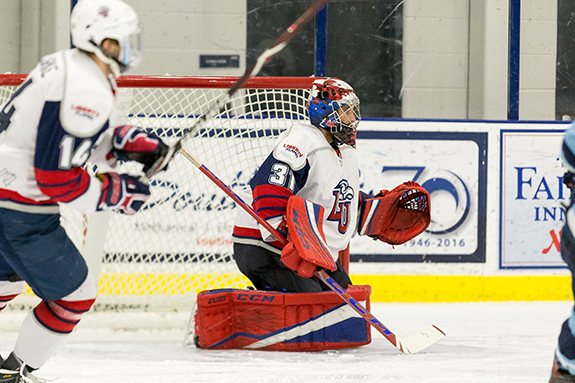 Cole Burack made 26 saves to improve to 12-1 on the semester with his third shutout.