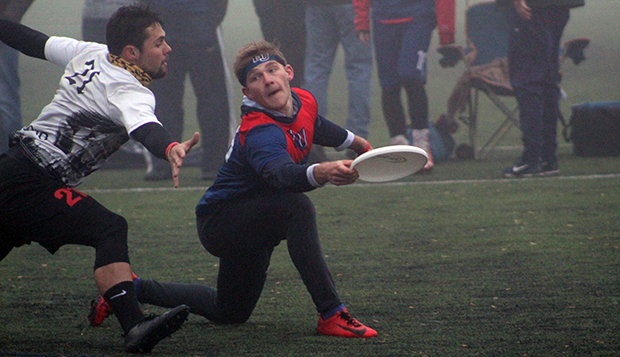 Sophomore Jake Norman makes a pass in Liberty’s 15-8 win over Edinboro (Pa.) in Saturday's final round of pool play.

Seeded fifth out of eight teams in this past weekend's Blue Ridge Open tournament, Liberty University's men's Ultimate team lost two of its three games in Saturday's pool play before winning two of three playoff games on Sunday, including the fifth-place final at the Liberty Mountain Intramural Complex.

The Flames opened pool play with a 15-7 loss to Tennessee before falling by the same score to Ohio and ending the first day with a 15-8 victory over Edinboro (Pa.). Liberty lost to Duke in Sunday's first round of playoffs, 15-10, before rebounding to beat Edinboro, 9-3, and Navy, 9-8, to clinch fifth place.

After a defensive stop, Jake Norman scored the game-winning point in the final showdown on a short pass from fellow sophomore Dan Mills.

"Navy was pretty athletic so being able to defend their guys downfield was the key to winning," Liberty Assistant Coach Brendan Kinne said. "We had a lot of players step up, including Josh Phillips with his cutting and great defensive play. Dan Mills and Sam Petersen led our offense and our defense really stepped up to the plate. We had a lot of athletic plays that kept us in the game defensively and we started converting a lot of the turnovers we were generating into scores."

Ohio was the eventual tournament champion, defeating Rick & Morty's, a team that featured five Liberty alumni, by a 15-11 score in the first-place final.

The tournament was the last one for Phillips and senior Caleb Georke, who are graduating this month.

"Their attitudes are incredible, constantly putting forward effort, and they will definitely be hard to replace," Kinne said.

Liberty will open spring tournament play by competing for the third consecutive season at the Feb. 2-3 Mid-Atlantic Warmup, hosted by William & Mary in Richmond. That 16-team event will feature a handful of schools from the Virginia Conference and several others ranked in USA Ultimate's top 100 from Pennsylvania, Ohio, North Carolina, South Carolina, New Jersey, and New York.