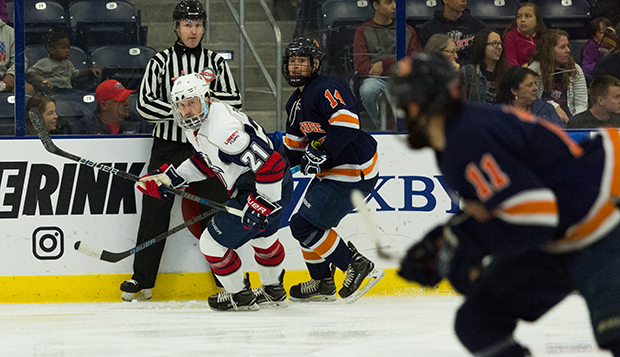 Sophomore forward Devin Pierce battles along the boards in an Oct. 12 home loss to Syracuse. (Photo by Gabrielle Calhoun)

Defending champion Liberty University strengthened its hold on first place in the ESCHL regular-season standings by completing a sweep of second-place Syracuse with a 4-1 victory, Saturday afternoon at the Tennity Ice Pavilion.

The eighth-ranked Flames ACHA Division I men's hockey team (15-3-1, 11-0-1 ESCHL), whose only three regulation losses this season have come against teams ranked above them (No .1 Adrian and No. 6 Ohio), had split their previous series with the Orange (8-6, 6-4 ESCHL), Oct. 12-13 at Liberty. (Syracuse, which joined the conference last season, also split its only series with the Flames last season in Lynchburg.)

"It wasn't pretty hockey this weekend, but we were able to walk away with two big conference wins," Liberty Head Coach Kirk Handy said. "We always know how hard conference games are going to be. We want to come out, at home or on the road, and make sure we get the job done."

The Flames improved on their special teams from Friday night's opener, a 5-4 overtime triumph, killing five of six penalties and scoring one power play goal on three man-advantage opportunities.

Liberty converted a costly goal to open the scoring at the 16:04 mark of the first period when Flames junior defenseman Garrett Nelson was tripped up by the stick of one Orange defenseman and slammed to the ice by another as he skated toward the left circle, a split second after distributing the puck to junior forward Brock Thompson. Before being helped off the ice, Nelson was credited with his team-high 19th assist when Thompson scored on a sharp-angled shot from deep in the left circle.

Syracuse's Connor McNamara tied the game at 1-1 with 1:57 left in the first period, sneaking a putback inside the right post for his 10th power play goal of the season.

But Liberty responded quickly to reclaim a 2-1 lead at the 17:41 mark of the second period when junior defenseman Basil Reynolds received a pass out of the right corner from junior forward Josh Hamilton and threaded a shot from the point through traffic and the five hole of Orange goalie Jake Kahler.

The Flames tacked on two more goals in the third, the first on a five-on-three power play with 14:51 to go set up by tic-tac-toe passing from sophomore forward Cole Gammer at the top of the left circle to junior forward Quinn Ryan in the left crease back up to junior defenseman Jacob Fricks in the high slot. Fricks one-timed his shot top shelf to stretch Liberty's lead to 3-1.

The Flames all but sealed the series sweep with 4:48 remaining in regulation when Gammer received a pass out of the left corner from junior defenseman Josh Bergen and sent a short feed from the back boards to Thompson in the left crease for a point-blank finish.

Liberty's penalty kill unit squelched a five-on-three power play opportunity by the Orange in the closing three minutes, which was essentially a six-on-three after Syracuse pulled Kahler out of the cage.

For the game, the Flames outshot the Orange, 34-27, and senior goalie Josh Halpenny made 26 saves to notch the win.

Next Friday and Saturday nights, Liberty will conclude its fall semester schedule with another ESCHL series against No. 24 Rhode Island at the LaHaye Ice Center.