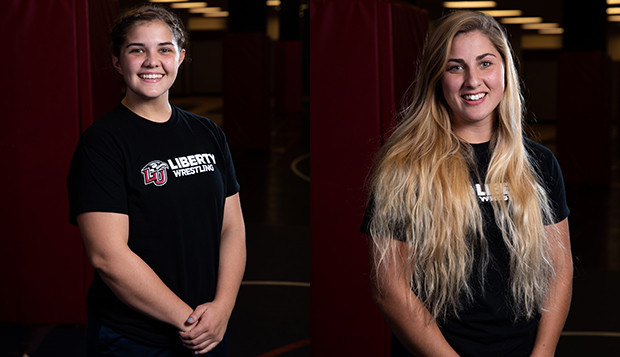 Manley, captain of the Lady Flames' second-year women's wrestling team, and her teammates will get their first regular-season action against women's competition in Saturday's tri-match at Ferrum University, where they will face the host Panthers and a team from Tiffin (Ohio) University.

"It's definitely going to be a fun weekend," Manley said. "We don't know what to expect from the competition, but the girls have been training really hard so they're excited for it."

After wrestling folkstyle throughout her high school career in Hawaii and at NCWA nationals, Manley and her teammates will compete in freestyle wrestling at Ferrum. The discipline involves more action from the standing neutral position rather than with one wrestler on top.

"Freestyle is new for all of us, so it should be a good learning experience," Manley said.

Manley's older sister, Charisse Manley, joined the team as a graduate transfer student this fall, competing at 143 pounds. She also wrestled a coed match at Messiah, as well as an exhibition against a female competitor from Princeton University at the Nov. 18 Star City Open in Salem, Va.

"She's been a blessing," Liberty Head Coach Jesse Castro said of Charisse. "She's a little older and more mature, and has experience, working with her sister and working with women."

When he was a graduate assistant coach at Liberty in the mid-1980s, Castro coached the Manley sisters' father, Randy Manley ('87), a youth ministry major from Florida who wrestled at 157 pounds for the Flames. He went on to seminary and is now a missionary pastor at a small church on the Hawaiian island of Molokai, where he introduced Cendall and Charisse to the sport.

"Wrestling is so instrumental in shaping character and developing spiritually," Cendall said. "Wrestling makes people more mentally strong and it has made me more spiritually strong, so it is cool to be able to share that with people."

While Charisse already has a master's degree in education and is working on a second master's in marriage and family counseling at Liberty, Cendall is studying psychology and applies that discipline on a daily basis through her chosen sport.

"My dad would always say wrestling is 90 percent mental and 10 percent physical so I've had that ingrained in me since I was a kid," she said.

The sisters have two older brothers and one younger brother, Caele Manley, who is a freshman wrestler at Wheaton College, so they are accustomed to being around boys. Now, in addition to a full roster of men's wrestlers to learn from, they have seven other women's teammates to train.

"It's just fun," Cendall said. "I've been able to really connect with people through wrestling. I've always had a good relationship with the guys on the (men's wrestling) team. With more women on the team this year, we have developed a whole new set of relationships. All the other girls have no previous wrestling experience, which is kind of nice because you get a blank canvas to work with. They are all really receptive to us, willing to learn, and excited to pick up the sport."

Cendall serves as more of a peer leader for the other female wrestlers while Charisse, as a teacher, focuses on instruction, instilling fundamentals and teaching techniques.

"We kind of tag-team on a bunch of it," Cendall said.

She has clearly defined objectives on and off the mat for her third season representing the Lady Flames.

"My goal is definitely to defend my national title, but also to become a more well-rounded wrestler," Cendall said. "I want to learn more about freestyle and to be an encourager to my teammates."