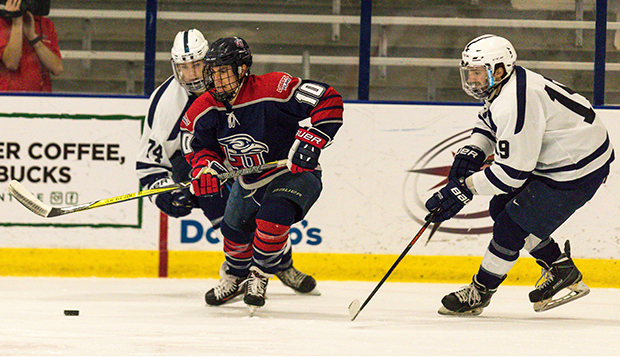 Senior Matthew Perri controls the puck in a game at the LaHaye Ice Center earlier this season. (Photo by Joel Isimeme)

"We had two goals in the first minute — 22 and 44 seconds into the game, so it was cool to see that," Flames Head Coach Ben Hughes said. "We have some guys out with injuries right now so it was good to see other guys step up and know we can still create some offense."

The Flames (10-3-2) led 4-0 after the first period before adding three goals in the second and one in the third.

Liberty outshot Maryland, 43-25, and freshman goalie Dakota Cyhaniak made 23 saves to earn his first victory with the Flames

Aaron Partridge, Perry, and freshman center Tim Doe each scored two goals and Crilly and freshman forward Darren Carter added one to pace the Flames' attack at Stevenson, which Liberty outshot by a 60-17 count on Sunday.

"We had a lot of good speed and we're getting better chemistry and the guys are learning how to play with each other," Hughes said. "It was just a matter of time before they started clicking."

The Flames led, 3-0, after the first period and 6-0 after the second before allowing their hosts to match their two goals in the third.

Liberty will complete its three-game "Battle of the Blue Ridge" series with ACCHL member Virginia Tech when it returns from Thanksgiving Break, Nov. 30 at Lancerlot Sports Complex in Vinton, Va., and Dec. 1 at the LaHaye Ice Center. The Flames won last month's first meeting with the Hokies, 9-1 at home.

Liberty moved up to a tie for No. 3 with Cincinnati in last week's ACHA DII Southeast Region rankings. The Flames will play the Bearcats on Jan. 20 and No. 5 Delaware Jan. 27 at home.