Instant replay for Flames, who blank Violets at NYU, 5-0 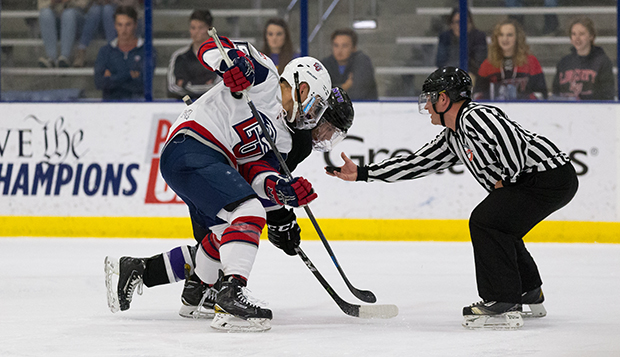 Liberty University's ACHA Division I men's hockey team scored another 5-0 victory against New York University, this time at Sky Rink at Chelsea Piers in Manhattan. Like the previous clash, on Oct. 20 at the LaHaye Ice Center, the Flames (12-3-1, 6-0-1 ESCHL) were held scoreless by NYU (3-6, 1-6 ESCHL) in the first period before racking up three power play goals, one fewer than in last month's matchup.

"It was a bit of a slow start, but that was to be expected a little bit with the long road trip," Flames Head Coach Kirk Handy said. "I am proud of our guys. That's a good win on the road."

Senior goalie Cole Burack posted the shutout, stopping all 26 shots NYU fired on him and the Flames' penalty kill unit kept the Violets scoreless on six chances (one in the first, two in the second, and three in the third).

"I liked our power play," Handy said. "They were executing well and we were able to kill off all of their power plays, so there were a lot of things we did well tonight."

The Flames were playing with only five defensemen as senior Kyle Crane moved up to the front lines.

"Crane played forward tonight and played well," Handy said. "The guys were working hard and are willing to do whatever it takes."

Then in the third, the Flames added three more unanswered scores to put the victory on ice. Thompson recorded the first of his two goals unassisted less than six minutes into the period before Bochinski converted an assist from sophomore forward Devin Pierce into a 4-0 advantage just over a minute later.

Thompson capped the scoring with a power-play goal off assists from Gammer and junior forward Quinn Ryan with 37 seconds remaining in regulation.

Saturday's 9 p.m. rematch will also be webcast live on a pay-per-view site. 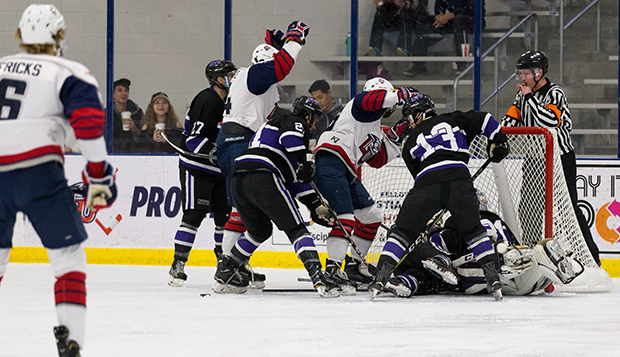 The Flames battle for the puck in front of New York's cage in a home series last month.