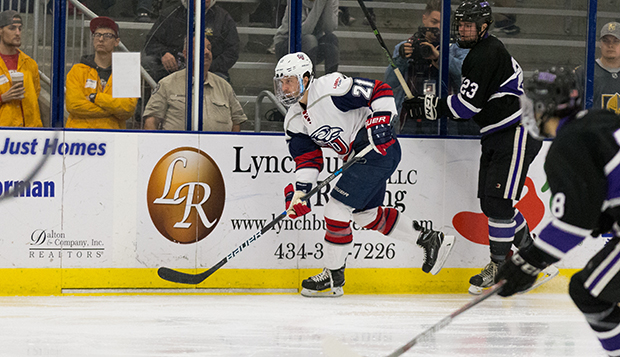 Liberty University's ACHA Division I men's hockey team will make the first of two trips in three weeks to New York this weekend, sandwiched around Thanksgiving Break. The Flames will challenge New York University this Friday and Saturday night less than a mile from Times Square at the Sky Rink at Chelsea Piers, overlooking the Hudson River.

Liberty will return to the Empire State for a Dec. 1-2 series at Syracuse, which dealt the Flames their only ESCHL defeat this season in overtime, Oct. 12 at the LaHaye Ice Center.

The Flames have won three consecutive meetings with NYU since squandering a three-goal lead in last season's first-ever meeting at the ACHA Division I level at the Sky Rink, a 5-4 setback.

All-time series: After splitting their first series last November in New York City, the Flames swept the Violets on Oct. 19-20 at the LaHaye Ice Center, winning the opener 7-3 and the rematch 5-0 to take a 3-1 series lead.

Liberty scouting report: The Flames remained at No. 8 in this week's ACHA DI computer rankings after splitting their home series against Ohio, losing a 2-0 lead by allowing three third-period goals in a 3-2 opening loss before pulling out a dramatic 3-2 triumph  on Pierce's game-winner in the closing seconds of overtime. That ended a 12-game skid in head-to-head bouts with the Bobcats.

Liberty's offense is sparked by junior forward Quinn Ryan, who has netted a team-high 14 goals and distributed the second most assists (13), behind only junior defenseman Garrett Nelson (18). Cole Gammer (11G, 11A) ranks second in scoring while fellow sophomore forward Jordan Bochinski (8G, 5A) has scored a team-high three game-winning goals, one more than Ryan and Pierce.

Coaches: Kirk Handy is in his 19th season as Liberty's head coach and has compiled an overall record of 416-175-27. Chris Cosentino is in his ninth season at the NYU helm and second at the Division I level, with a 19-15-2 record. He guided the Violets to a 139-66-8 record at the DII level.