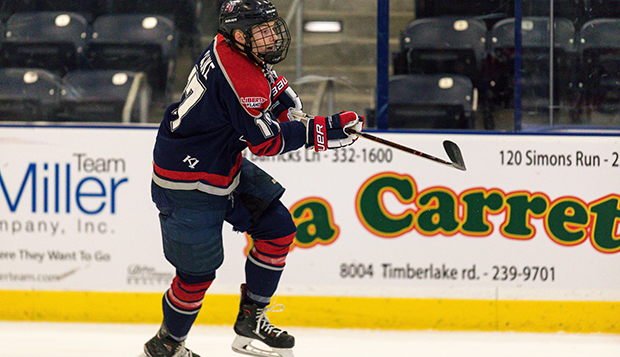 Sophomore defenseman Micah Hauke clears the puck up the ice in a game earlier this season. (Photo by Joel Isimeme)

It was a bittersweet weekend for Liberty University's ACHA Division II men's hockey team, which debuted at No. 5 in the Southeast Region rankings last week and lost in overtime at No. 4 Delaware on Sunday, 5-4, despite outshooting the Blue Hens, 47-27. The loss that came on the heels of Liberty's 5-3 victory at Rowan on Saturday.

Delaware (13-3) outscored the Flames by a 3-1 margin in the second period, starting with back-to-back goals by Devin LeBlanc in the opening 1:18. Freshman center Timothy Doe put Liberty back on top, 3-2, a minute later off assists from freshman forward Devin Melice and junior forward Drew Crilly before the Blue Hens tied it back up on a goal by Larry Hooper.

Roy put away a pass from Crilly 5:27 into the third period, staking the Flames to a 4-3 lead before Delaware's Jeremy Dewit netted the equalizer five minutes later and Stephen Bryson scored the game-winner with 25 seconds left in the five-minute sudden-death overtime, popping the puck over the head of Flames sophomore goalie Adam Partridge.

"It was tough to swallow," Flames Head Coach Ben Hughes said. "I felt we played one of the best games of the year."

Against Rowan, Liberty outshot the Profs by a 31-24 count and got two goals by Melice, two assists by Perri and sophomore wing Keegan Spours, and single scores by freshman forward Darren Carter, Crilly, and Wilkie.

"I have been really impressed with Darren Carter, who had one of his better weekends, and (sophomore defenseman) Bryce Harrison has come a long way, too," Hughes said. "They have really progressed. You don't always see those guys on the scoresheet, but they have had a big impact on our team's success because of the little things they're doing well."

Liberty returns to the road this weekend to play at Maryland on Saturday at 7 p.m. and Stevenson (Md.) on Sunday at 5:15 p.m., both Mid-Atlantic Collegiate Hockey (MACH) South Division foes.