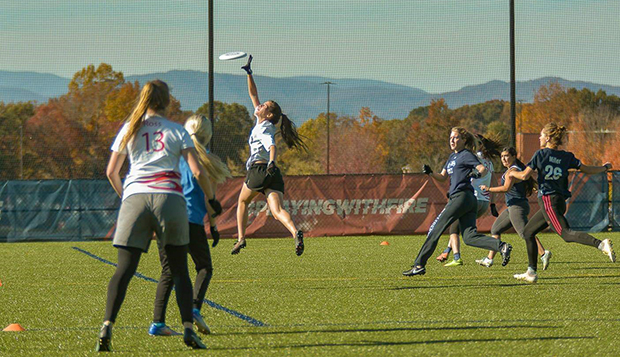 Lady Flames junior Annamarie Stow goes up to make a catch during the women's alumni game on Nov. 4 at the Liberty Lacrosse Fields. (Photos courtesy of Eric Carson Photography)

The Lady Flames lost Saturday's opener against Clemson, 10-8, before pulling away from UNC Wilmington in the second half of a 10-5 triumph.

"Both offenses held consistently in the game against Clemson, and even though we lost, it was great to see all our new players having an impact," Liberty Head Coach Jonathan Mast said. "Against UNCW, our rookies had even more highlights and the whole team meshed well together."

On Sunday, Liberty doubled up UNC Charlotte, 12-6, before dropping an 11-3 contest against Duke. The Lady Flames bounced back to beat Appalachian State, 11-4, before finishing strongly with an 11-3 victory over George Mason.

"Every single player on the team contributed in a major way," Mast said. "We are excited to continue to grow as a team and build on the early success we experienced this weekend. The tournament was a major growing experience and the team surprised me with how well they did."

After nearly 100 players from around the state joined Liberty's women's and men's teams to form eight 15-player co-ed teams at the Hill City Hatter on Saturday, Nov. 3, both the women's and men's lineups faced alumni teams on Sunday, Nov. 4, with the Lady Flames falling to their predecessors, 15-8, and the Flames losing by a 15-6 count.

"It was a great time for everyone involved and very helpful for the current roster to get the opportunity to play against high caliber players like that who helped push them and gave them tips to improve as individuals," Mast said.

Liberty will host a final tryout in late January. The Lady Flames will travel to the University of Virginia for their first spring tournament on Jan. 26-27 and play two to four more events before contending for a sixth consecutive Atlantic Region berth at the Virginia Conference Championships in April.