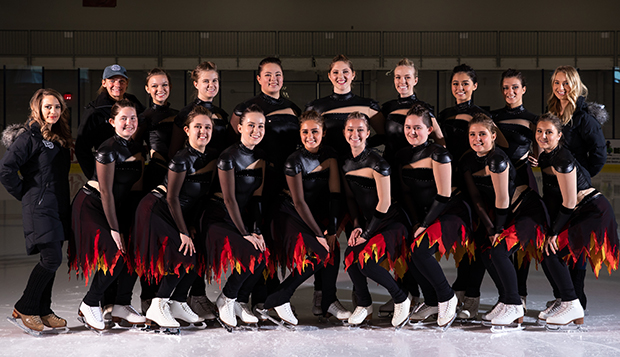 After making a positive first impression with its new program during intermission of the ACHA Division I men's hockey team's game against Syracuse on Oct. 12, Liberty University's synchronized skating team will perform in front of judges for the first time this fall Saturday at the Carolina Synchro Classic in Hillsboro, N.C. The International Judging System (IJS) judges will give the Lady Flames a score to use as a baseline for future competitions, including next Saturday's Kalamazoo (Mich.) Kickoff.

"We will be the only Collegiate team skating at this competition, and we will use it as a critique for the judges to gauge where our program is and if any of the elements will be called out," Liberty Head Coach Tatiana Payne said. Changes this year have added three new required elements — including cutting 30 seconds from the length of the routine, requiring quicker transitions between elements. "The elements we need to complete are a lot more intricate this year with the new specifications."

Judges assessments include a technical score and component score, which factors in composition, interpretation, skating skills, performance, and transitions.

Payne and Liberty Associate Coach Emily Halvorson worked together to choreograph the three-and-a-half-minute program to music from "The Hunger Games."

"The girls really enjoy this program and you can see that out on the ice," Halvorson said. "We are continually polishing and working on the performance aspect."

Liberty will bring all 15 members of its roster — including five freshmen — to the Carolina Classic, but due to injuries only 12 will skate. That is the minimum required for Collegiate-level competition, which the Lady Flames moved into last fall.

Seniors Katherine Thacker and Catherine Bredshall and junior Jordan Robinson, who have passed their Senior, Novice, and Junior Moves in the Field tests, respectively, serve as Liberty's co-captains.

At Kalamazoo, Liberty will face off against three of the schools it competed against at last season's U.S. Synchronized Skating Championships held Feb. 21 in Oregon — Adrian, Michigan, and Western Michigan, who all placed in the top five. The other two teams in the field will be Illinois and Notre Dame, which is new to the Collegiate division this year.

Liberty is one of five teams in the Eastern Region that will compete at the Feb. 1 Eastern Synchro Skating Championships in Worchester, Mass., where the top five teams qualify for the March 1-2 nationals in Plymouth, Mich. That will be the Lady Flames' third trip to Michigan after the Dec. 1-2 Dr. Porter Synchronized Skating Classic.