No. 8 Flames set for non-conference clash with No. 6 Bobcats 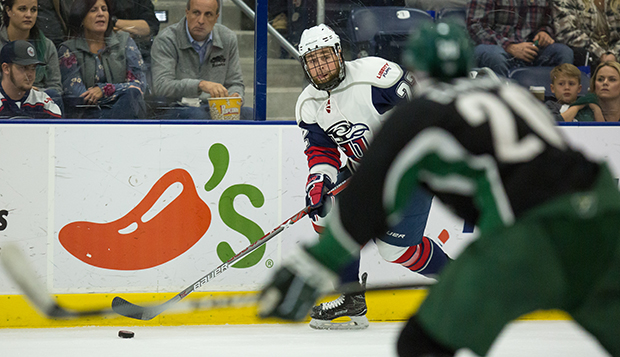 Flames senior captain Zak Hayes looks to pass the puck up ice against the Bobcats last season, when Ohio came away with a 2-1, 4-3 sweep. (Photo by Joel Isimeme)

Ohio visits the LaHaye Ice Center this Friday and Saturday having won the past 11 meetings with Liberty University's ACHA Division I men's hockey team, including two season-ending setbacks in the playoffs.

Flames Head Coach Kirk Handy respects the Bobcats, but believes his team has shown the drive, determination, and discipline to end the series skid.

"Ohio's a strong opponent for us," Handy said. "We're focused on refining our team and making our team better. We have a great group of guys in the (locker room), guys who create their own energy by working hard."

Sophomore forward Cole Gammer, who netted his first hat trick for the Flames with four goals in Saturday's 8-1 rout of Stony Brook, and his teammates are looking forward to the challenge.

"I am extremely excited to play Ohio, and if we play a full 60 minutes this weekend, I am fully confident we can beat them," Gammer said. "Every guy on every line will have to be rolling."

Liberty scouting report: The Flames' resounding sweep of ESCHL rival Stony Brook — their first at home since 2011 — solidified their first-place standing in the conference, but Liberty remained at the No. 8 position in the ACHA DI national rankings.

Offensively, Liberty's attack is sparked by junior forward Quinn Ryan, who leads the team with 13 goals and ranks second to junior defenseman Garrett Nelson (16) with 15 assists. Gammer moved ahead of Nelson into second place on the Flames' scoring list with 11 goals, nine assists, followed by junior defenseman Jacob Fricks (3G, 10A) and sophomore forwards Jordan Bochinski (8G, 4A) and Devin Pierce (5G, 7A).

Cole Burack (7-1, 2.55 goals-against average, 90.1 save percentage), coming off his best performance of the season, has played the majority of minutes between the pipes for the Flames. He is complemented by fellow senior Josh Halpenny (3-1, 1.75 GAA, 93.2 SP, two shutouts).

Ohio scouting report: The Bobcats jumped three spots to No. 6 in the rankings after splitting its series with No. 4 Davenport at Bird Arena. Ohio features extremely balanced scoring with nine players in double figures in points, led by forwards Gianni Evangelisti (7G, 11A), Tyler Harkins (7G, 9A), and Cody Black (4G, 9A) and defenseman Jacob Houston (4G, 9A).