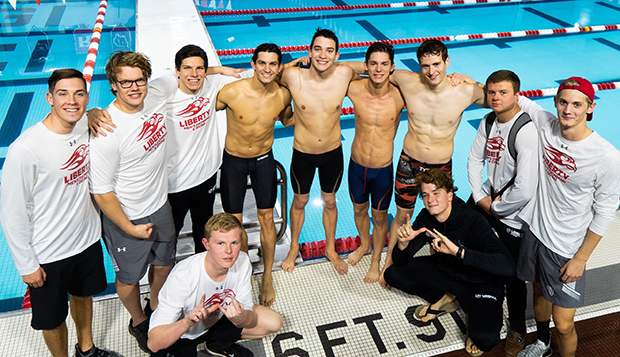 Liberty placed third out of 16 men's teams and fifth in the combined men's-women's standings even as the only school without any women's swimmers. (Photos by Tariq Kelly)

The 10 Liberty University men's swimmers who competed in the first Collegiate Club Swimming (CCS) Eastern Regional meet, Saturday and Sunday at Rutgers University in Piscataway, N.J., made a huge splash, finishing third out of 16 schools and many of the region's fastest individual swimmers.

"It was amazing," Flames Head Coach Heath Grishaw said. "The quality of swimmers we have this year is definitely a step up from last year. We were blown away."

"We did phenomenally well and swam to our best potential," Grishaw said. "The way these guys performed has raised the bar and set some pretty high goals for the rest of the season. We are excited about going to (the March 29-21 CCS National Championships) at Ohio State, where I'd like to see us turn some heads like we did this weekend."

Individually, Charles Fernandez, a junior pentathlete from Guatemala competing for the first time this fall, won his specialty event, the 200 freestyle, in 1:47.83 and finished fifth in the 50 free in 22.52 and sixth in the 100 free in 48.95. He also anchored the Flames' winning 80 free relay (7:25.30), following freshmen Caleb McClelland, Jonathan McAlister, and Christian Brasher; its second-place 400 free relay (3:20.20), following McClelland, Brasher, and fellow freshman Dan Flittner; and its fifth-place 200 free relay (1:30.83) following McClelland, Flittner, and fellow freshman Caleb Rice.

The Flames will compete this Saturday and Sunday at another CCS meet at North Carolina State while their diving team will host Duke in their first competition in Liberty's Natatorium on Saturday at 9 a.m.