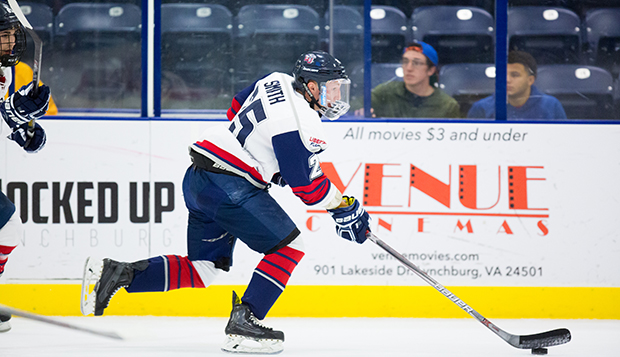 "Kennesaw State is a top-end team in the South Region, so it is good to know we can keep up with them," Flames first-year Head Coach Jared Smith said. "That's the type of team we have to beat to advance out of the South Region. We still have a ways to go."

Liberty needs to finish in the top 10 in the South Region rankings to qualify for the playoffs. The Flames will find out where they stand in their region when the first ACHA DIII men's hockey computer rankings of the 2018-19 season are posted on Friday.

In Saturday's opener against Kennesaw State, Flames junior forward Zach Moore started the scoring  2:19 after the opening faceoff before the visiting Owls netted the tying and go-ahead goals early and late in the second period to seize a 2-1 lead. Freshman right wing Scott Chisholm netted the game-tying goal at the 13:30 mark of the third period, finishing assists from Barstead and graduate forward Kyle Jassmann.

Flames junior Derek Guzik shut out Kennessaw State for the third period, five-minute overtime, and shootout to push his record to 5-0-1 in goal. He played in the rematch as well, when the Owls scored three of their four goals with a man advantage, including the game-winner in overtime.

"That penalty in overtime killed us," Smith said. "Guzik was solid both games and kept us in it. The real difference was we took too many penalties in both games. In the first game, we were able to kill them off pretty well and had a few chances to win it in regulation, but bounces weren't going our way."

Liberty is now at the midpoint of its regular season with 10 games down and 10 to go.

The Flames had Friday's scheduled game at UNC Charlotte canceled and will next be in action Nov. 30 at Georgia, where they will also face the University of Michigan-Flint on Dec. 1.