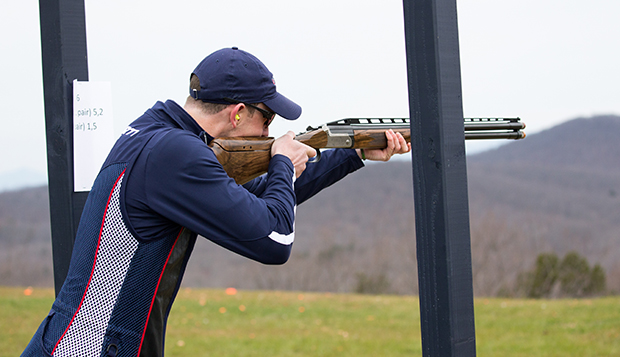 The event served to prepare the second-year program for this weekend's ACUI Northeast Regionals at the Prince George's County Trap and Skeet Center in Glenn Dale, Md.

"We had a great turnout and a good shoot," Lancaster said. "It's been a little challenging with the wind, especially for trap and skeet because it makes the targets go high and low, all over the place."

Liberty Head Coach Dave Hartman expects approximately 10 teams to be in the field of competitors in Saturday's and Sunday's regional event near Washington, D.C. That event and the Feb. 23-24 Eastern International Championships will serve as qualifiers for the March 25-30 ACUI Collegiate Clay Target Championships in San Antonio, where students will shoot in trap, skeet, sporting clays, international trap, international skeet, and super sporting clays.

Last year, Liberty made its debut at the Upper East Coast Regionals in Maryland before placing third at the Eastern Championships in Ft. Benning, Ga., and third in the high team overall standings at nationals.

"This is going to be an amazing year," Hartman said. "Every team we compete against is a worthy opponent. We just have to do the best we can as a team and work together to strive for the highest goals."

Last weekend, Labrozzi and Pongs competed in the Nationals Sporting Clay Association (NSCA) National Championships in San Antonio. Labrozzi placed second out of 70 shooters in the D class of the 28-gauge event while Pongs placed in the top 100 of 1,300 competitors in the master class, which included professionals.