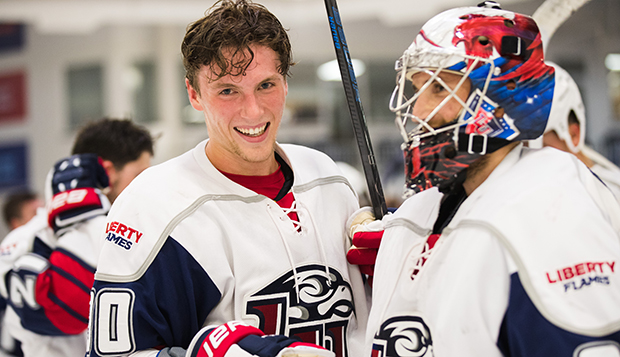 Cole Gammer (left) and Cole Burack came up big for the Flames on opposite ends of the ice. (Photo by Leah Seavers)

"These conference games are huge and we want to keep moving forward," Liberty Head Coach Kirk Handy said after his team improved to 10-2-1, 5-0-1 in ESCHL play "We saw guys put into practice what they learned from the losses last weekend at (defending national champion) Adrian. Discipline was a big key for us the last two games. I liked our physical game, but I thought we played really smart tonight."

Junior defenseman Jacob Fricks helped set up the Flames' first score by controlling a loose puck on the defensive end and sending an outlet pass to Ryan up the left wing. He skated to the top of the left circle and timed his crossing pass perfectly for Gammer, cutting down the right crease. Gammer's one-touch finish trickled off the pad of Stony Brook goalie Richard Shipman inside the right post for a 1-0 lead with 15:40 left in the first period.

Stony Brook evened the score at 1-1 with 10:01 left in the period on a fast break started by defenseman John Hickey and put away by forward Dustin Rinaldo. But the Flames reclaimed the lead less than a minute and a half later and stretched it to 3-1 two minutes after that by capitalizing in the opening 20 seconds of consecutive power plays.

On the first, junior defenseman Garrett Nelson and Gammer worked the puck down low to Ryan left of the net, where he sent a pass to junior forward Brock Thompson in front for a five-hole finish with 8:37 left in the period.

Then, after Gammer took an illegal check against the back boards putting the Flames back on the man advantage, Fricks received assists from Nelson and sophomore forward Devin Pierce in the high slot, where he lifted a wrist shot through a screen set in front by junior forward Victor Blomberg for a 3-1 advantage at the 6:26 mark.

Liberty capped the first-period scoring on a spectacular give-and-go pass sequence between junior forward Josh Hamilton and senior forward Zechariah Roberts on a two-on-two fast break. Hamilton ignited the rush and found Roberts in the left circle, where he sent a quick return pass to Hamilton, who pocketed the puck into an open net.

Stony Brook started the second period on a five-on-three advantage, but Burack kept the Seawolves off the scoreboard, gloving a wide-open shot out front by defenseman Frank Coscia after blocking a barrage of shots.

"(Senior forward Zach) Hayes, (sophomore forward Andy) Clarke, our whole defensive corps was awesome," Gammer said. "Everyone was getting in front of shots and, from the bench, that fired me up and fired a lot of other guys up, too. We definitely used the momentum from that to our advantage."

Liberty quickly extended its lead to five goals as Gammer completed his first hat trick of his Flames career by tacking on two scores in the final 2:37 of the period — ripping the first from the left circle into the upper netting off a beautiful crossing feed from Roberts on a power-play. With 46 seconds left, junior defenseman Chaydan Lauber unloaded a cannon of a shot from the high point that Gammer redirected low past Shipman to boost the Flames' advantage to 6-1.

Liberty stretched its lead to 7-1 with 13:17 remaining in the third when Thompson received the puck from sophomore forward Jordan Bochinski and his crossing pass deflected off Lauber's skate into the back of the net.

Finally, with 1:33 left in the third, Thompson eluded the official as he skated through the left circle and threaded a sharp-angled assist across the goal mouth to Gammer, cutting through the right crease for his fourth score at the right post.

The eighth-ranked Flames return to the LaHaye Ice Center to take on No. 9 Ohio next Friday and Saturday at 7 p.m. 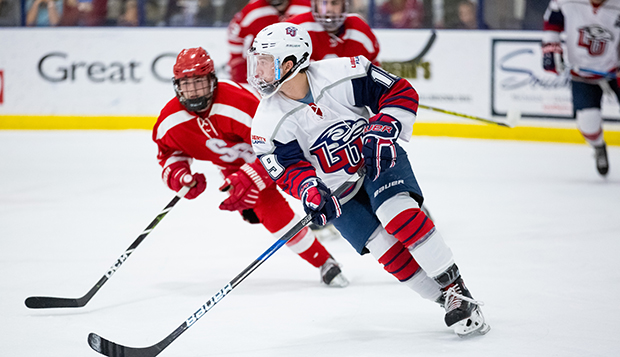