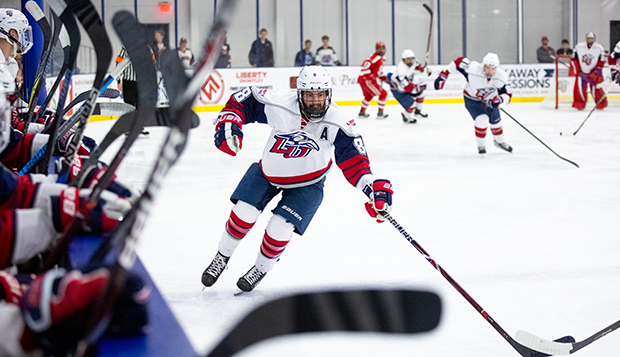 A critical early-season showdown between ESCHL favorites Liberty University and Stony Brook lived up to pre-game expectations as the Flames, ranked eighth in ACHA Division I men's hockey, fended off the 13th-ranked Seawolves, 3-1, Friday night at the LaHaye Ice Center.

"We didn't have our best night tonight, we didn't bring our A game, but we were able to find a way to win," Flames Head Coach Kirk Handy said. "Through all the different line combinations and injuries we had, we were able to stick with it and I was proud of our guys. We played a really disciplined game and got some solid goaltending and timely goals tonight."

Liberty (9-2-1, 4-0-1 ESCHL) drew first blood on a quick counterattack after junior defenseman Basil Reynolds cut off a two-on-one opportunity by the Seawolves (6-1-2, 2-1-2) deep in his own zone. Junior forward Victor Blomberg controlled the puck along the left boards to sophomore forward Devin Pierce, who poked a pass ahead to sophomore forward Jordan Bochinski near the red line. Bochinski accelerated through the left wing and sliced into the slot for a one-on-one with Stony Brook goalie Richard Shipman before sweeping through the crease and tucking the puck under his pads for a 1-0 advantage with 7:09 left in the first period.

A miscue by the Flames allowed the Seawolves to tie the contest at the 19:07 mark of the second. Liberty senior goalie Cole Burack came out of the cage to attempt to clear the puck, but it deflected off the skate of junior defenseman Jacob Fricks right to Stony Brook forward and leading scorer Nick Belger. He fired an uncontested wrist shot into the open net.

Liberty reclaimed the lead just over two minutes later, however, when sophomore forward Cole Gammer intercepted the puck at the red line and retreated before sending an outlet pass onto the stick of Flames junior forward and leading scorer Quinn Ryan at the top of the right circle. Ryan quickly rushed toward the net and deked the puck in front of Shipman before finishing through the five hole to put Liberty back on top, 2-1, with 7:02 to go in the second.

Around the 4:00 mark, Ryan started a Flames fast break with a one-handed steal in traffic on the defensive end and dished a pass out to junior linemate Brock Thompson on the right wing. Thompson skated from beyond his own blue line into the Seawolves' right circle before threading a wrist shot between Shipman and the right post to stretch Liberty's lead to 3-1.

"Stony Brook is consistently a strong team so we know what to expect when they come into our barn," Bochinski said. "It's a good rivalry that we have and these are fun games to play in — hard, fast-paced, gritty games that just feel so much better when you come out with a win."

The Flames were only called for four penalties on the night, one more than the Seawolves.

"We kept our heads tonight and stayed mentally strong," Bochinski said. "That was something we really focused on coming into this weekend. We know we can't take penalties against good teams like Stony Brook."

Saturday's rematch at the LaHaye Ice Center will be webcast live by LFSN and carried by ESPN+ with the puck dropping at 7 p.m. 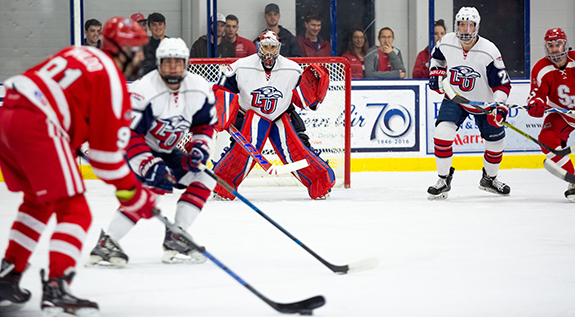 Senior goalie Cole Burack made 24 saves to atone for a miscue that led to Stony Brook's only goal.