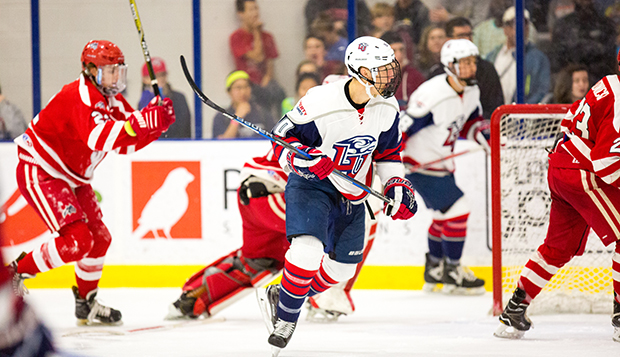 Before sweeping the Seawolves on their home ice to start off the New Year, Jan. 13-14 in New York, Liberty had lost nine of the previous 12 regular-season matchups with Stony Brook.

Liberty Scouting Report: The Flames sustained their first two regulation losses of the season last weekend at defending national champion Adrian. As a result, Liberty dropped three spots to No. 8 in this week's ACHA DI national rankings, the first of the season determined by computer rankings rather than coaches' votes.

While sophomore forward Jordan Bochinski leads the Flames with three game-winning goals, junior forward Quinn Ryan has established himself atop the team's list of scoring leaders with 12 goals and 12 assists. Garrett Nelson ranks second with 14 assists and Gammer is a close third with seven goals and six assists.

Stony Brook Scouting Report: The Seawolves, who have outscored opponents by a three-to-one margin this season (48-16), are coming off their second consecutive series split with an ESCHL opponent, losing a shootout to Rhode Island after winning the opener, 6-1. Previously, like Liberty, Stony Brook lost a shootout to Syracuse, the only other blemish on its record to date.