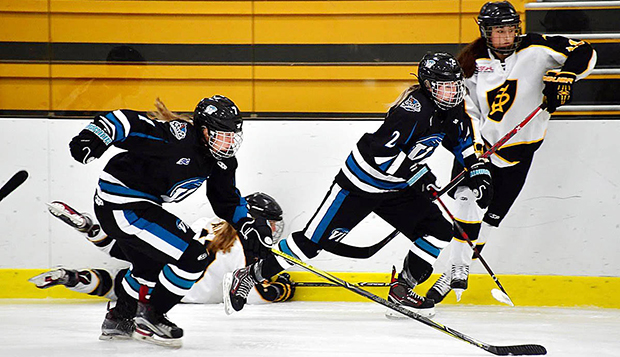 Yannick Truter, left, is an two-way player who showcases speed and grit on the ice for the Vancouver Island Seals.

Creating a positive team culture is as much a focus of Liberty University second-year ACHA Division I women's hockey Head Coach Chris Lowes as developing a successful combination of talented players on the ice.

That is what attracted Yannick Truter to Liberty, when she visited Liberty from Vancouver Island, British Columbia, last spring, and eventually became the Lady Flames' first recruit of the 2019-20 season. Truter is the first player the Lady Flames' current staff of coaches have offered a commitment to as a junior in high school, as she was last spring.

"She spent some time with our players, fell in love with the campus and Liberty, and we felt just as good about the prospect of having her here," Lowes said. "She's just a great fit for Liberty, where she is going to have an awesome opportunity to grow in her faith, and to be a leader and a cornerstone for the Christian environment and the culture on our team."

Truter's parents are from South Africa and her family has taken regular mission trips back to Africa to do mission work in Zambia.

On the ice, Truter is in her third season as a 5-foot-5, 135-pound center on the Vancouver Island Seals' Midget AAA team. She scored seven goals and distributed 13 assists in 23 games last year and has one goal and six assists through six games this fall.

"She's a great skater and really a good all-around hockey player who should come in and have an impact right away," Lowes said. "We need our centermen to be two-way players, able to win battles and control the defensive end and to produce on the offensive end. She is not oversized, but she plays big and plays with grit. She has a nose for the net and shows flashes of being a playmaker."

"We will only be graduating a few players next year, so we are being pretty selective in our recruiting," Lowes added. "Even with that, we felt really confident and offered her (a spot) in the spring, had some more talks with her over the summer and she committed to us this fall. She skated with our team and we liked what we saw. She showed all the potential to be an elite player in the ACHA."