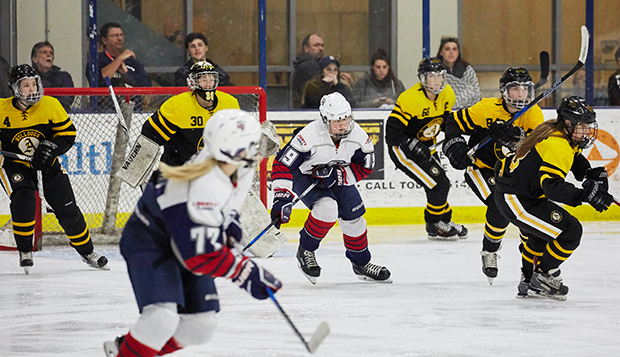 After five scoreless minutes of bonus time in Arrington Ice Arena, the Lady Flames came away with a 4-4 tie, evening the head-to-head series at 1-1-1 since winning the ACHA DI national championship against the Bulldogs on March 18.

"It is never fun tying a game, but considering the circumstances we were in, it was encouraging that we came back," Liberty Head Coach Chris Lowes said. "We played better than we did (in Friday's 3-1 loss), even in the first period when we spotted them three goals. We made a couple really bad mistakes and they capitalized. All in all, we looked a lot more comfortable on the ice and showed a lot of poise in rallying from a three-goal deficit."

Liberty outshot Adrian 35-18 and had a few more power-play opportunities than the Bulldogs, who took advantage.

"We gave up a two-on-one, missed an assignment in our own zone, and had a couple of bad turnovers, and they capitalized on our worst mistakes," Lowes said. "It was a physically tough game, but we were ready for it and handled it better than yesterday, when we were caught off guard by the intensity of the battle."

Polson cut Adrian's lead to 3-1 with 13:42 left in the second period, finishing an assist from graduate defenseman C.J. Tipping. After Tipping was called for a penalty, setting up a four-on-four, Lady Flames senior forward Lauren McDonald received a pass from junior forward Vanessa DeMerchant and launched a wrist shot off the crossbar. It was not ruled a goal, but Polson was right there to punch in the putback to make it a 3-2 contest.

Just over two minutes later, the Bulldogs doubled their advantage to 4-2 with 5:33 left in the second period before Polson completed her hat trick 19 seconds later to pull Liberty within 4-3.

"Polson had one of those games that we knew she was capable of," Lowes said. "We definitely needed her offensive production and were excited to see her do that. She made the most of her opportunities and made her presence known every time she was on the ice."

Finally, with 9:04 remaining in regulation, McDonald netted the equalizer top shelf off an assist from junior defenseman Emily John.

"Lauren had a great game and played with a lot of energy," Lowes said.

Junior goalie Nadia Rupoli made 14 saves to preserve the tie and force overtime.

"After we got through the first period, she played a lot more solid second and third periods," Lowes said. "It was good to see her bounce back. She made some saves down the stretch to keep us in it."

Back-and-forth action in the extra period resulted in quality chances for both teams. Liberty played the last minute on a five-on-four power play but could not cash in with the game-winner.

"As we got late in the game, we still had some gas left in the tank," Lowes said. "Overtime wasn't pretty, but it looked like we had a little more bounce in our step."

He is looking forward to the ACHA regular-season-ending rematch with Adrian on Feb. 15-16 at the LaHaye Ice Center.

"I'm glad we play them four times," Lowes said. "We have a lot of work to do between now and then, and both teams will have progressed in different ways."