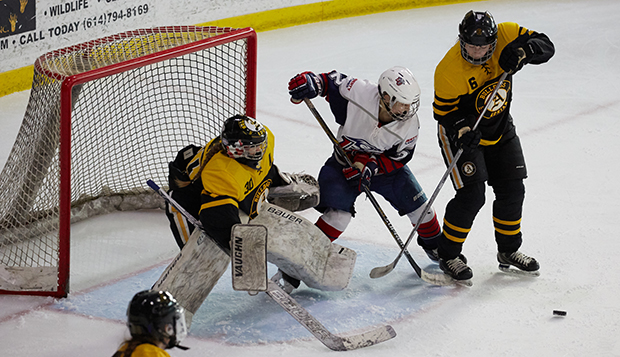 For Liberty University's ACHA Division I women's hockey team, defending its national championship this season could be just as difficult as winning it last season. The Lady Flames found that out on Friday night in a rematch of the 2018 ACHA DI national title game with No. 5 Adrian College. Third-ranked Liberty gave up a power-play goal for the game-winner and an empty netter in the final seconds of a 3-1 setback at Adrian's Arrington Ice Arena.

"It was a great game, about what we expected," Liberty Head Coach Chris Lowes said. "It was a playoff-style game as far as intensity and physicality. Adrian's a big, fast, physical team. They're talented and tough. Both teams were motivated, and the refs let us play."

Lowes said the outcome was determined on special teams.

"They were one for four on the power play and we were zero for six," he said. "Our power play looked pretty poor, and they found a way to get it done with their (penalty kill). It was one of those games where we knew it was going to come down to a bounce here or there and they scored on the power play. They're a veteran team and they got the better of us."

The Bulldogs outshot the Lady Flames, 28-25, and freshman goalie Megan Peterson made 25 saves in defeat.

"The shots weren't so much a factor as it was a possession game," Lowes said. "It was more about controlling the zones and having offensive zone time."

Following a scoreless first period, Adrian netted the game's first goal with just under 11 minutes left in the second, moments after killing a five-on-three power-play chance by Liberty.

With 5:06 remaining in the period, Lady Flames senior forward Lauren McDonald scored the equalizer, finishing an assist from junior defenseman Emily John to tie it at 1-1.

A cross-checking penalty against Liberty put the Bulldogs on the power play five minutes into the third period, and they capitalized with 13:18 to play before Adrian killed two more penalties in the final 10 minutes. Lowes pulled Peterson for the final 2:15 and Liberty allowed the final goal into an empty net with two seconds to go.

"It was good for us and exposed a few areas we can work on," Lowes said, eager to see the Lady Flames get back on the ice  in the series finale on Saturday at noon. "It's another quick turnaround, and we have time to adjust. There are a lot of areas we can clean up. If we can pull off a win on Saturday, we'll be happy with a split. If we can't, it will give us a lot of motivation to avenge two big losses when we play them again."

The Lady Flames will host Adrian in the last two games of the ACHA regular season, Feb. 15-16 at the LaHaye Ice Center, and could face the team again in the 2019 ACHA National Championships near Dallas.