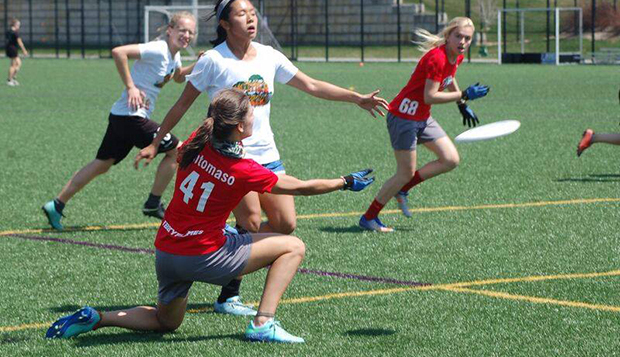 "We are expecting it to be a pretty large tournament," said Lady Flames Head Coach Jonathan Mast, who anticipates several Carolina Conference teams to be there including NC State, UNC Wilmington, UNC Chapel Hill, and Wake Forest, as well as Virginia Conference competitor Virginia Tech.

The Lady Flames' 16-player roster features about half returning players and half newcomers after adding some talented prospects at tryouts in September.

"We got a lot of athletic girls at tryouts who are bonding pretty well and picking up the game," Mast said. He plans to hold another tryout the first week of December to fill out a 20-player roster for spring semester. "We are excited to see how they will do in this weekend's tournament, where we will be experimenting both offensively and defensively and seeing from a coach's perspective what works and what doesn't and who can be utilized where in the regular season."

"We are looking at McKenzie to anchor the offense this year and for Anna Marie to initiate a lot of the offensive flow," Jonathan Mast said.

He said Liberty's other primary offensive handler, sophomore Brianna Kuo, could be the team's most improved player.

"She has put a lot of work in over the offseason and looked really sharp in tryouts," Mast said. "We are looking forward to seeing how much she has developed from end of last season."

A few of their primary deep passing targets will be senior Victoria Dissmore, junior Anna High, and sophomore McKayla DiSarle.

Freshmen with potential to make immediate impacts include Samantha Weber and Casey Matthews.

"Samantha played lacrosse through high school and has pretty natural talent for the game," Mast said. "She should fit well into defensive and offensive roles as an insert cutter. We are looking to experiment with Casey in the deep game, to play a role similar to what Victoria (Dissmore) does."

In the spring, Mast has put in a bid for Liberty to host the Virginia Conference tournament, but that will take place the same weekend as the men's event and will likely be played at JMU as in previous years if the Flames are granted their bid to host the men's tournament.

The Lady Flames have qualified for the Atlantic Regional Championships the past five postseasons with top-four finishes at the Virginia Conference tournament. They placed third last year after posting back-to-back runner-up showings to perennial power Virginia from 2016-17.

"I'd be pretty surprised if we are not a contender for one of the top three spots in our section, though the fourth- through seventh-place teams are pretty close in skill level," Mast said. "My hope is that by the time the Virginia Conference rolls around, we'll be in the top two."

Liberty will participate in a Hat Tournament at the Liberty Mountain Intramural Complex fields on Nov. 3 before holding its Annual Alumni Game on Nov. 4.