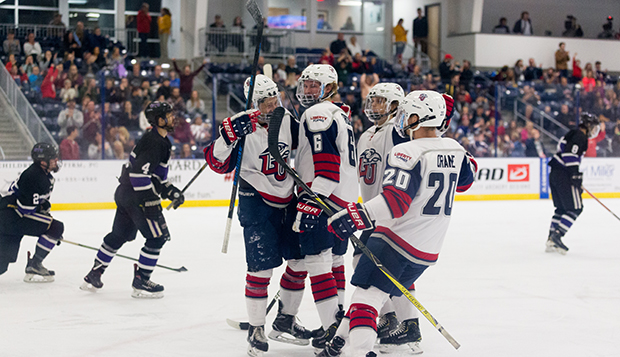 Liberty celebrates one of its seven goals against NYU Friday night at the LaHaye Ice Center. (Photos by Gabrielle Calhoun)

"That line has really been playing well for us since we put them together a few weeks ago," Flames Head Coach Kirk Handy said. "I really liked their effort tonight as each one of them scored a goal and Roberts added two assists."

Both teams got on the scoreboard quickly with the Violets striking first on a counterattack just 54 seconds after the opening faceoff, when Scott Mulligan received an assist from Alex Hopkins in the slot and deked the puck from near the left post around Flames senior goalie Cole Burack into the open net.

Liberty netted the equalizer exactly one minute later when Roberts sent a pass across the goal mouth to Cox for a tap-in finish inside the left post.

"Playing with Cox and Hamilton, they're good on the forecheck, and we mesh well together and have some chemistry," Roberts said.

The Violets reclaimed the lead with 7:07 left in the period, moments after killing a penalty. Alex Peck sent a crossing pass out of the right corner to Isaac Ceh in front, whose shot was blocked by Burack but right to Parker Richards, who lifted the putback into the top right corner of the cage for a 2-1 advantage.

Liberty sophomore forward Devin Pierce capitalized on the tying and go-ahead goals in a span of two-and-a-half minutes midway through the second period, both on broken plays in the Violets' defensive zone. On the first, junior forward Victor Blomberg stole the puck in the slot and sophomore forward Jordan Bochinski chipped the loose puck to Pierce on the inside edge of the left circle where he fired it past NYU goalie Patrick Cavanaugh. Then, with just under 10 minutes left in the period, Bochinski had a shot rejected in the left crease but Pierce got a shot off a split second before taking a hit and it beat Cavanaugh to give the Flames a 3-2 lead.

NYU converted the equalizer just over three minutes later on a power play when Mason Gallegos fired a rebound into the open net after Burack dove out of the cage to try to smother the puck. But with the two teams skating in four-on-four action, the Flames reclaimed a 4-3 lead in the final 1:30 of the period when junior defenseman Josh Bergen sparked a quick counterattack with an assist to Roberts who ripped a shot from the top of the left circle into the upper netting.

The Flames stretched their edge to 5-3 just 16 seconds after the third-period faceoff when Roberts stole a clearing attempt by a Violets defenseman for a quick two-on-one rush on net, sending a crossing pass to junior forward and captain Josh Hamilton trailing in the right crease for an open-net finish.

Liberty padded its advantage to 6-3 with 7:22 remaining in regulation on perhaps the prettiest goal of the night. After Quinn Ryan maneuvered the puck through traffic in the high slot, fellow junior forward Brock Thompson did the same skating toward the cage from the left wing before flipping a backhanded pass to Ryan, who threaded his shot from the left endline between the left post and the back of Cavanaugh's skate.

With the Flames on a five-on-three advantage with 3:54 to go, Thompson capped the scoring by rifling a wrist shot from the high slot top shelf.

"Brock had a good third period for us tonight," Handy said. "We have to have a better start. We can improve on that Saturday night. We can make sure that we are dialed in for 60 minutes. For us, it's a long season and it's about continuing to get better every night."

He said the Violets, who moved up to the DI level last season after beating Liberty's DII team in the 2017 national championship game, gave the Flames a good fight after splitting their only series last November in New York City.

"NYU played hard tonight," Handy said after both teams were called for 12 penalties. "We'd like to play a little more five-on-five. Saturday night's a new day, and we've got to come ready to play. It's a big game."

"A strong start and a killer mentality will help finish them off," Roberts added. "It's important because they're ranked in the top 20, too."

Saturday night's 7 p.m. rematch will be webcast live by LFSN and carried by ESPN+. 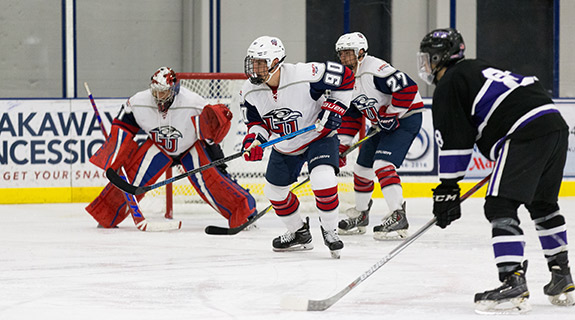