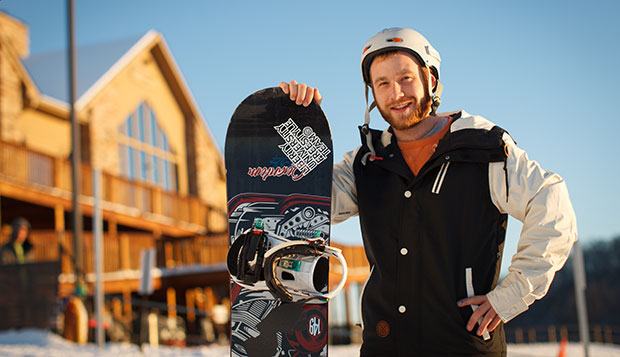 Freestyle competitions allow the fourth-year member of the Flames' men's ski and snowboard team the opportunity to express himself artistically in an extreme sport with few limitations.

"Snowboarding has no rules," Promnitz said. "You have the freedom to kind of do whatever you want. You can do tricks if you want or ride straight. There's no right and wrong way to have fun when you're snowboarding."

However, if he expects to pick up bonus points in a freestyle event, Promnitz knows he has to execute a specific sequence of stunts on his runs down the slope and over jumps, rails, and other obstacles.

"You really have to make a game plan for competitions," he said. "You have to strategize and put together a good combination of tricks that you know are going to be scored really well."

He said judges focus on style, amplitude, and technicality, and may dock points from boarders for not making clean tricks or landings.

Promnitz includes an average of three jumps and two rails on a given run.

"You want to show a variation," he said. "You don't want to do the same tricks over and over. Spinning both ways is good as well as landing and taking off switch," the opposite way from a rider's natural foot forward.

Over the Christmas break at the Mountain Creek terrain park near his home in Vernon, N.J., Promnitz landed a front-sided board slide on a double kink rail, something he listed on his Facebook wall as a lifetime goal.

"It's a pretty difficult trick," he said. "It was the first time I ever did one on that type of rail. It takes a lot of experience to slide through a kink like that, especially facing backwards." 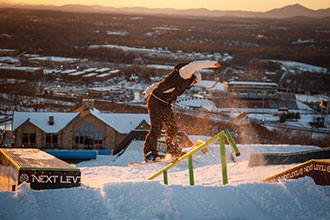 He credits Liberty Mountain Snowflex Centre, Liberty's year-round ski slope, for allowing him the training base to refine his skills throughout the school year.

"Snowflex has really been a big booster in learning tricks," he said. "I've noticed a big improvement in what I can do. In the freestyle aspect of snowboarding, you can excel so much faster because the conditions are so consistent.

On the other hand, he did suffer the first serious injury of his snowboarding career while training at Snowflex, fracturing the radius in his left wrist in September of 2011.

"I hit a box and my feet slipped out from under me," Promnitz said. "I was falling backwards and put my hand behind me, but my elbow was locked, so it had no give. It was a solid impact and it just broke."

His orthopedic surgeon inserted a plate to stabilize the wrist and help prevent re-injury.

"It'll be there forever," said Promnitz, who returned to the team in time for the 2012 season. "I went to physical therapy and now it's as good as new."

As the team's most veteran snowboarder, in his 11th season competing after first strapping on his boots at the age of 13, Promnitz has an edge on his teammates when riding through real snow.

"I've been there the longest and I have more experience on snow than most of the guys on the team," he said. "I'm kind of spoiled because where I live, I'm 10 minutes from the mountains. When we go to (away) competitions, I feel more comfortable maneuvering on snow, which is probably why I have a little bit of an advantage."

The Flames often have a leg up on snowboarders from other schools when hosting events at Snowflex, such as the United States Collegiate Ski and Snowboard Association competition set for 6 p.m. Feb. 2, when they entertain Appalachian State, University of Virginia, and Virginia Tech, and upcoming Collegiate Freestyle Association events in March.

"It's definitely a big asset having (Snowflex) here," Promnitz said. "It's not terribly difficult to learn, but you need to be on it a few times to be successful. Last year, people were struggling because they weren't used to the surface and we all dominated."

While the ski team features brothers Tim and Jonathan Steltzer (Jonathan signed a sponsorship deal with the ski equipment company 4FRNT last year), coach Will Scheren has a young snowboarding team this year, with Promnitz his only returning boarder.

"I am excited to see who steps up in competition, who can put together a clean run and go out and execute when it comes time," he said. "A lot of the guys have come a long way. I'm looking forward to the (Feb. 2 event at Snowflex). The guys are going to rip."

Based on their performance in USCSA events and the regional competition, set for Feb. 17 at Timberline Resort (W.Va.), Liberty looks to qualify a strong team of skiers and snowboarders for the March 4 national event at Sun Valley, Idaho.

"I'm hoping I can make it back to nationals this year and do well," said Promnitz, who placed 10th at last year's freestyle competition held at Sunday River in Maine, leading the Flames to a seventh-place team finish. "I'm hoping to improve on that. Top five would be ideal (and) good for our school."