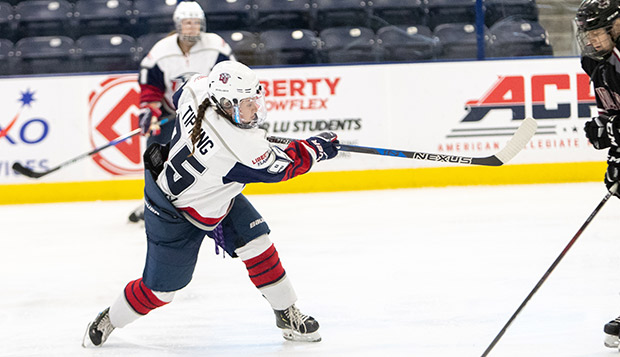 In Friday night's first game of the UMass Showcase, Liberty University's ACHA Division I women's hockey team shut out Rhode Island for the fourth time in a row, winning 4-0 on freshman goalie Megan Peterson's first shutout and ACHA victory for the Lady Flames.

"We had a long trip up today after we were delayed in leaving, but the girls were able to shake that off and played a decent game," Liberty Head Coach Chris Lowes said. "Megan stopped one breakaway and a couple odd-man rushes, so she made a few good saves when we made mistakes."

The Lady Flames swept the Lady Rams all three times they met last season on the road — in the UMass Showcase opener, 7-0, and a series at Rhode Island by 4-0 and 7-0 scores.

On Friday night back at the Mullins Center, Liberty outshot Rhode Island 20-3 in the first period, scoring the lone goal on the power play with 4:48 remaining when Rachel Gibson tapped in a backdoor feed from junior and senior forwards and assistant captains Vanessa DeMerchant and Lauren McDonald.

Less than a minute and a half into the second period, junior forward Alex Smibert deflected in a shot from the point off the stick of graduate defenseman C.J. Tipping for a 2-0 advantage.

The Lady Flames added two more second-period scores, the first on a power play with sophomore forward Danica Polson redirecting another shot by Tipping into the net with 10:58 left. Finally, with 4:19 to go, junior forward Aly Morris scored off assists from Polson and Smibert.

"That was a line we tried last weekend, and they had another good game for us tonight," Lowes said.

Peterson saved a breakaway opportunity late in the second period, one of her 16 saves for the game as the Lady Flames outshot the Rams, 49-16.

Liberty will take on Davenport in Saturday's second game of the UMass Showcase, starting at 4 p.m., before facing Bishop's (Quebec) University on Sunday at 7 a.m.

"We didn't play Davenport last year, so they are a little bit of an unknown, but we will be ready to go," Lowes said.