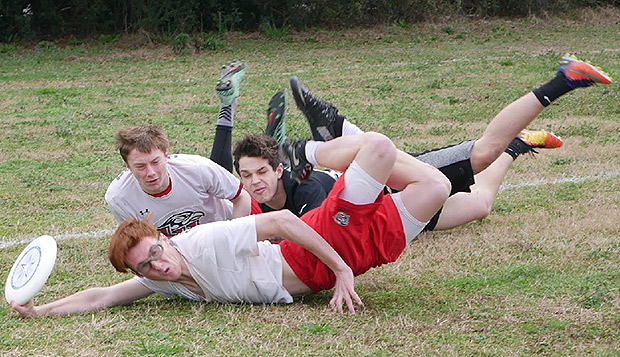 "This is probably the most athletic group and most skilled group from top to bottom that we have had to date," said fourth-year Head Coach Brendan Phillips, whose 23-man roster includes seven newcomers. "We are farther ahead than last year. We're really excited about what the season's looking like."

"It will be a good challenge and test for us," he said. "It will give us a good, clear picture of where we are and areas we need to focus on improving. We're installing our offensive and defensive packages, so it's really foundational things in the fall."

Liberty started preseason conditioning from the first day of practice, joining with the Exercise Science department for a three-week weight training and conditioning program.

"I am excited to see where we are physically," Phillips said. "With our strength and conditioning program, we've been getting the guys physically prepared for a long season through the spring."

The Flames will host the Blue Ridge Open on Dec. 1-2 at the Liberty Mountain Intramural Complex and has received commitments from Case Western Univeristy, the Naval Academy, Ohio University, William & Mary, and one of the top high school teams in the country from the Raleigh, N.C. area.

"That will allow us to do some recruiting from a team that has won two of the last three (U18) national championships," said Phillips.

Liberty has also put in a bid to host the Virginia Conference Championships on April 13-14.

"We are the frontrunner, since we are centrally located in the state and all the teams love coming here," Phillips said.

The location will be announced in January.

"We feel we're in a really strong position going into conference championships and regional championships in the spring," Phillips added. "We've missed out on regionals by a combined total of three points the past two years, so we're right there on the cusp and with the depth that we have coming back, things are looking really good for us come the spring."