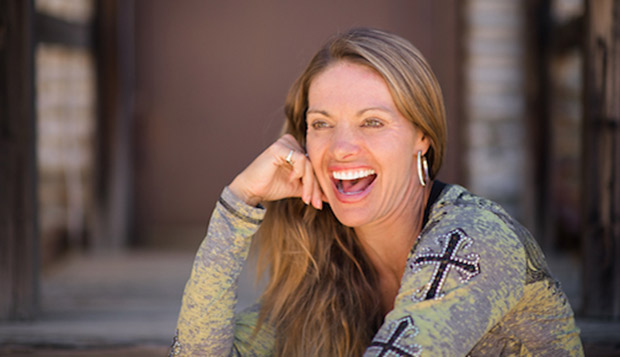 "I am really excited to be here as a coach and as a mentor," Gollnick said. "Triathlon has been a huge part of my life for the last 20 years and I am really excited to share that with the students at Liberty. I truly believe that God gave me my athletic talent and I believe He gave it to me to glorify Him. That's the most exciting part of coming to Liberty as the new triathlon coach, that I get to put the university's mission statement, Training Champions For Christ, into practice."

Gollnick and her husband, Todd, have three children, including current Liberty students Jordan, a junior, and Zach, a freshman, which provided extra incentive for their move from Steamboat Springs, Colo., where she has trained more than 100 Ironman finishers through online coaching.

"My husband and I both feel God has opened this door to share my triathlon knowledege, and also to share the spiritual side of the sport, which is huge," Gollnick said.

Gollnick, 48, arrived in Lynchburg on Sunday after placing 23rd among among women in the Elite Division of the Spartan Obstacle World Championships in Lake Tahoe, Calif., which she called "the Super Bowl of obstacle course races." More than 14,000 competitors completed the grueling race.

Throughout her career, she has won more than 200 multisport events and competed in 37 Ironman races — endurance triathlons consisting of a 2.4-mile open-water swim, 112-mile cycling stage, and 26.2-mile run, a full marathon. She has competed in 13 Ironman World Championships, held annually in Kona, Hawaii, and won five others held around the United States.

She also served as a personal trainer in Colorado and co-authored "Triathlete EQ: A Guide For Emotional Endurance," with sports neuropsychologist Dr. Izzy Justice.

Liberty cycling and triathlon Assistant Coach Van Phillips said Gollnick is full of spunk as an athlete and extremely enthusiastic and upbeat as a personal trainer and coach.

"She has a gymnastics background and she has a 5-foot, 5-inch frame that is nothing but muscle," said Phillips, who witnessed Gollnick winning her fifth Ironman in Louisville, Ky., in 2008, when she completed five cartwheels across the finish line. "She's definitely got a very strong personality, and a flair about her. She brings so much energy, and that motivates everybody."

"Liberty is an amazing university and the facilities are amazing," Gollnick said. "For any triathlete that wants to excel, I don't think they can find a better set of coaches. We are all going to get along great and it's really going to motivate the athletes as well."

"We are thankful and excited to have Heather as part of our coaching staff in Club Sports with all that she brings to the table as a professional triathlete," Liberty Club Sports Senior Associate Athletic Director Jeff Boettger added. "She will be able to dial into what our student-athletes' needs are, especially with the transition from water to bike and bike to running."

"Both her and her husband have experience with running triathlons, so that will be a big asset," Boettger said.