DIII Flames open ECCHA action with comeback win over UR 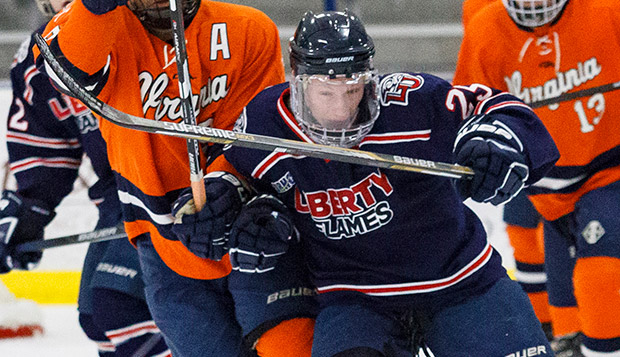 After opening the 2018-19 season last Friday with a victory over Virginia, Liberty University's ACHA Division III men's hockey team opened play in the East Coast Collegiate Hockey Association (ECCHA) with a 5-3 triumph over new ECCHA rival Richmond this past Saturday at the LaHaye Ice Center.

Graduate forwards Kyle Jassmann and Andrew Barlass started the scoring for the Flames less than three minutes after the opening faceoff. Jassmann skated the puck out of the left corner and found Barlass open in the left crease for a one-timed finish.

Less than three minutes later, Kyle Maxwell evened the score for the Spiders before sophomore defenseman T.J. Moores put the Flames back on top, 2-1, with a shot from the point at the 2:52 mark of the first period.

Forward Ryan Hall gave the Spiders their only lead with 7:22 left in the second period before Flames freshman Maxx Mitchell tied it at 3-3 on an odd-man rush just 1:03 into the third. Then, with 13:17 remaining in regulation, Brandon Smith recovered a rebound of a shot by Mitchell in the left of the goal mouth and wrapped the puck around Richmond goalie Charlie Mosse inside the right post to give the Flames a 4-3 advantage.

Barlass iced the win with his second goal of the game on a follow with 2:57 to play.

The Flames will return to action Oct. 5-6 for a series at ECCHA member Coastal Carolina.