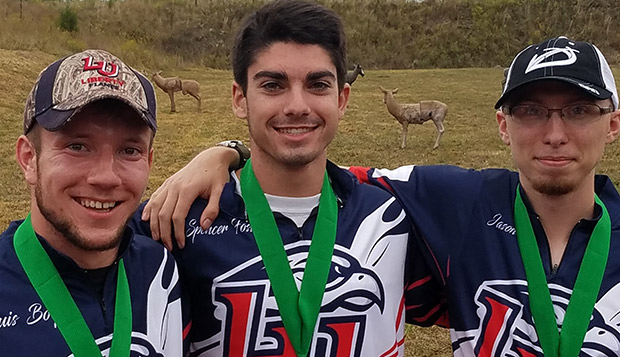 United States Collegiate Archery Association (USCA) merged with USA Archery's Collegiate Programs over the summer, which nearly doubles the number of archers Liberty University's men's and women's team members will compete against in the 3D National Championships, hosted by the Archery Shooters Association in Foley, Ala., from Oct. 26-28.

"Essentially, we'll be shooting against every collegiate archery program in the nation now," said Flames second-year Head Coach Ian Rigney, who expects his archers to continue to contend for national titles. "The strongest 3D archers were in the USCA, so we were already shooting against the top schools in the nation."

After tryouts earlier this month, Rigney finalized a roster of 14 — eight men and six women — on this season's travel team.

"The talent is about the same across the board," Rigney said, comparing the men's and women's teams. "I don't know who will bring home the most medals."

He returns a trio of veterans on the men's side — senior Louis Boyd, who won individual indoor and 3D team titles in bowhunting last year, and graduate students Spencer Foster and Jason Lynch. Foster will shift to compound this season after placing fifth individually in bowhunting at last year's 3D nationals.

They will be complemented by junior Evan Blanthorn as well as sophomores Luke Tabor and Isaac Underhill and freshmen Will Allen and Connor Rothermel.

Freshmen Hala Skelton and Emma Suggs have helped raise the sights for the women's team, bolstering a cast of returning archers led by senior Emily Mullins and sophomores Kaylee Martin and Hannah Suber.

"Hala and Emma are both highly decorated archers who compete in women's compound," Rigney said.

Skelton has traveled across the United States and around the world to compete for USA Archery. Her mom, Amy Skelton, is a Level 2 certified USA Archery coach who also serves as range captain for the team at its new 15-target range at the Liberty Mountain Gun Club.

Senior Rachel Beiler, who often goes bowhunting for elk in Montana and Utah, is a newcomer to the team and has emerged as the top women's bowhunter.

"This is the highest quality team I've had so far, since I came to the team in 2012," Rigney said. "Just about every archer has some type of win — on local, state, or national levels."

Rigney is confident in their capabilities of adding to the Flames' and Lady Flames' totals of 10 national titles over the past 10 seasons when they travel to next month's 3D nationals, indoor nationals in February, and outdoor target nationals in the spring. National indoor winners will be determined by regional results from 8-10 locations, with Liberty competing at JMU.

Liberty will form a four-man barebow team, a three-woman bowhunter team, and mixed teams (one male, one female) for compound, bowhunter, and barebow.

"Our men's barebow team placed fourth at last year's 3D nationals and I expect them to win this year," Rigney said. "All three of the mixed teams have a really good chance to compete for national titles."