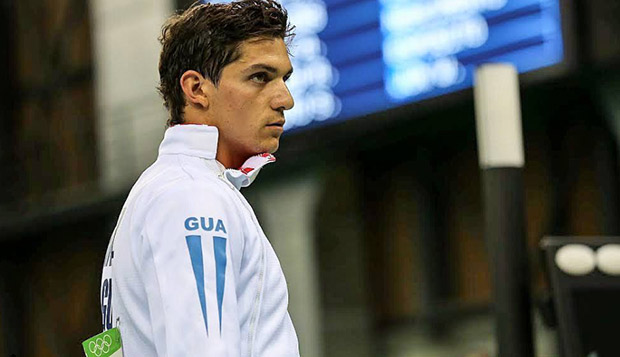 Before returning to Lynchburg, Va., to start his fall semester, Liberty University junior men's swimmer Charles Fernandez will represent his homeland of Guatemala in the Modern Pentathlon World Championships from Sunday through Wednesday in Mexico City.

The modern pentathlon includes running, shooting, swimming, horseback riding, and fencing, Fernandez's forte. Ranked 57th in the world, he will compete in the mixed relay on Sunday followed by men's individual qualifying on Tuesday for Wednesday's finals.

Fernandez, 22, is studying economics through Liberty's online degree programs. He qualified for the 2019 Pan Am Games in Lima, Peru, by capturing gold medals in the men's individual and mixed relay events at the Central America Caribbean Games in Colombia, South America, in July. With a top-five finish in Peru next summer, he would qualify for his second Olympic Games, set for 2020 in Tokyo.

He qualified for the 2016 Summer Games in Brazil by becoming the youngest ever to win the modern pentathlon at the 2015 Pan Am Games in Toronto at age 18.

The week after placing 15th at the Olympics in Rio, Fernandez won the 2016 Modern Pentathlon Junior World Championships in Cairo, Egypt, raising his world ranking to No. 4.

Fernandez was selected by the International Union for Modern Pentathlon (UIPM) and the International Olympic Committee (IOC) as one of only 16 athletes from around the world, including some of the most influential Olympians, to serve as an ambassador and athlete role model for the 2018 Youth Olympic Games, set for Oct. 6-18 in Buenos Aires, Argentina.